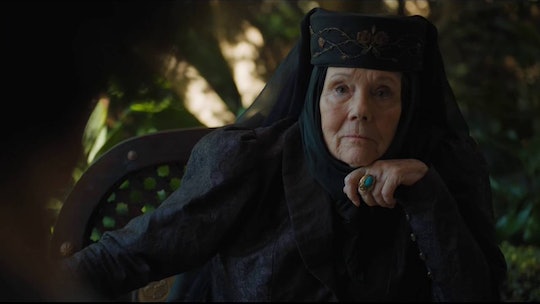 Lady Olenna Confesses To Killing Joffrey On ‘Game Of Thrones'

A lot went down in the latest episode of Game of Thrones, and fans can't stop discussing it. One of the most shocking moments was when Lady Olenna confessed to killing Joffrey just after she accepts a vial of poison from Jaime, which will supposedly kill her.

Fans were already in a state of shock when the Unsullied easily took Casterly Rock from the Lannisters. However, Grey Worm immediately knew something was wrong. Unfortunately, he was right. Cersei, being the evil genius that she is, sent Jaime and his army to Highgarden instead, the home of the Tyrells. Once Olenna saw the Lannisters, she already knew what was to come, so she calmly went to her office to wait.

When Jaime arrived, they had a nice little chat. Fans were distraught, knowing this was the end for Olenna. Eventually, she finally asked Jaime how she would die and Jaime, in a small act of mercy, poured a vial of poison into her wine.

Olenna asked if there'd be any pain and Jaime guaranteed her there wouldn't be. She then chugged it and finally confessed to the crime that Tyrion was always blamed for: the death of Jaime and Cersei's son Joffrey.

Back in Season 4, Joffrey was poisoned to death at what is commonly known as the "Purple Wedding." Tyrion, along with Sansa, were immediately blamed for the murder. However, Olenna later revealed to Margaery that it was she who was behind it, along with Littlefinger.

Now, with death looming, Olenna finally let Jaime know the truth, but she didn't just spit out. No, instead, she built up to it, until he slowly but surely realized what she was saying.

She reminded him about how terrible Joffrey's death was. Apparently, Olenna hadn't known it would be that bad and it was never her intention to make his death so painful. Olenna then told Jaime to pass along the news to Cersei because she wanted Cersei to know it was her who had killed her son.

With that, Jaime walked out, leaving Olenna to die. The whole scene was incredible, especially considering the fact that Olenna purposefully waited until Jaime gave her an easy death before confessing to murdering his son. She wanted to make sure he made that mistake before he knew what she'd done. Incredible.