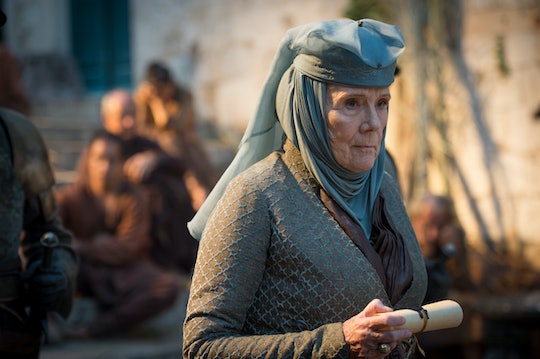 Lady Olenna Tyrell may not have been the ruler of Westeros, but that doesn't mean she wasn't the queen: the Queen of Thorns, the Queen of Hats and Veils, the Queen of Speaking Her Mind. She was always on hand with a wry quip that cut down her enemies metaphorically while she worked on a secret plan to take them down literally, too. Sadly after many a failed coup, she finally met her end in "The Queen's Justice." But even in the moments before her death, Olenna made it clear that there was no one wittier. These Lady Olenna Tyrell one-liners from Game of Thrones prove she was the true ruler of Westeros.

With Cersei sitting on the throne, there was no way Olenna was going to outlive the rest of the war, even with Daenerys' protection. The two women had been at each other's throats for too long for Cersei to let Olenna live, especially after wiping out the rest of her family in one fell swoop. But Olenna made the most of every single moment leading up to her final goodbye. Her death may mean the end of House Tyrell, but it means something even more tragic, too: goodbye to the most effortlessly ice cold sass this side of the Narrow Sea. Every time a subpar quip is uttered, Olenna will be missed. Here are just a few of her best zingers...

Don't Tell Her When To Eat Cheese

When Olenna demanded a server bring her some cheese, he tried to explain that it was traditionally served after cake. Olenna, however, was having none of that, proving once and for all that she could be the most #relatable.

"And you never...? Not once? Not in any way? I congratulate you upon your restraint. But it's a natural thing, two boys having a go at each other beneath the sheets."

When Tywin Lannister made insinuations about Loras' sexuality, Olenna remained characteristically unruffled. She wasn't ashamed of Loras in the slightest, and she shouldn't be. Tywin had some nerve, too, considering what went on in his family.

Because Of The Implication

"War is war, but killing a man at a wedding? Horrid. What sort of monster would do such a thing? As if men needed more reason to fear marriage."

Olenna keeping it real as always. The layers of intrigue in her comments was always what made them the best: she may have appeared to be comforting Sansa, but she was actually telegraphing her own plan to murder Joffrey at his wedding.

When Margaery wasn't looking her best, Olenna wasn't going to mince words about it. She may not have always been comforting, but you could count on her for honesty.

Maybe Ancestry.com Could Figure It Out

After Loras became engaged to Cersei and Margaery to Joffrey, Olenna tried to figure out how their knotty family tree would look going forward; it was all very "I'm My Own Grandpa." The Lannisters do love a confusing family connection, and Olenna loved to point that out.

She Can Be Very Understanding

"Margaery is the queen. You are not the queen because you're not married to the king. I do appreciate things could get a bit confusing for your family."

Case in point: Olenna never passed up an opportunity to get in a dig at Cersei, especially when it came to incest. And let's be real, Cersei gave her a lot of opportunity.

Not only did Olenna start a conversation with Cersei by calling her out ("Put the pen down, dear. We both know you're not writing anything."), she went on to straight-up call her a tart. Few people were bold enough to say exactly what they were thinking at the exact moment they thought it, but Olenna never held back.

"I wonder if you're the worst person I've ever met. At a certain age, it's hard to recall. But the truly vile do stand out through the years."

Ripping on Cersei was truly Olenna's favorite hobby. Not only did she call Cersei old on one occasion, refer to her as a tart, and constantly point out her penchant for incest, Olenna also delivered a final blow that summed up everything wrong with Cersei in one cold line.

"Must have been horrible for you as a Kingsguard, as a father. It was horrible enough for me. A shocking scene. Not at all what I intended. You see, I had never seen the poison work before. Tell Cersei. I want her to know it was me."

At the very end, Jaime decided to give Olenna an honorable death by poison, which she took — right before explaining that she killed Joffrey. Not Tyrion. Her. And she didn't have a single regret about it. For a character who'd spent season after season being brutally awesome, it was the perfect way to go out.

And this is just a small collection of the best words of Lady Olenna Tyrell. They called her the Queen of Thorns for a reason.