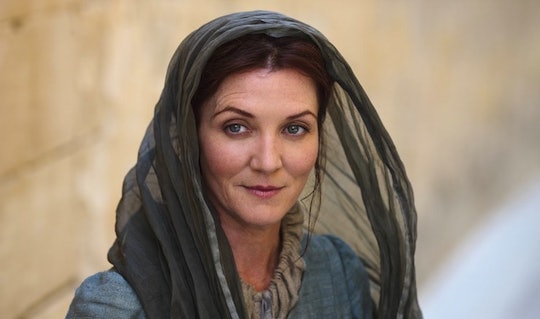 These Lady Stoneheart Theories Will Excite 'Game Of Thrones' Fans

Fans of George R. R. Martin's A Song of Ice And Fire series have been dying to see one character make the jump from page to screen: a woman by the name of Lady Stoneheart, who is actually Catelyn Stark resurrected and consumed with revenge. As the seasons pass, it becomes less and less likely that she'll appear, but that hasn't stopped book fans from wanting to see her. It's definitely understandable, because an appearance from Lady Stoneheart would mean the return of the much-beloved character in a new form. But since it seems unlikely that Catelyn will be back, these Lady Stonehart theories from Game of Thrones try to reimagine the character.

After being murdered by the Freys in A Storm of Swords, the story goes that Catelyn gets brought back to life by Beric Dondarrion, though she is much changed and can no longer speak. However, she still thirsts for revenge against those who have done her family so much harm. Leading the Brotherhood Without Banners, Lady Stoneheart goes on to kill anyone connected to the Lannisters, Boltons, or Freys — even children. The HBO series has played out a little differently, however, and Catelyn has never reappeared after being murdered in Season 3. Despite the differences in storyline from book to television, fans have still come up with a couple of ways Lady Stoneheart could still be included, both of which involve her daughters picking up the slack.

Sansa's similarities to her mother have been remarked on more than once in the show, so she could go on to fulfill her mother's role as Lady Stoneheart. Reddit user FibDynamo speculated that Littlefinger might kill Sansa (possibly after she turns him down a final time), after which she may be brought back to life by Beric and take on Lady Stoneheart's revenge mission. Sansa's story has already been so heartbreaking that seeing her murdered might be a bridge too far, but it would definitely be a shocking twist on the story. At least Sansa would have Jon Snow around to chat about the pros and cons of resurrection.

Arya Takes Up The Killing Mantle

Arya is a popular choice when it comes to reimagining how Lady Stoneheart might appear. Similarly bloodthirsty and consumed with revenge against those who wronged her family, Arya could easily take on the same position in the narrative even without being killed and brought back to life. Reddit user tge90 even theorized that Arya could use her face-changing powers to take on Lady Stoneheart's appearance at some point while striking fear into Lannister hearts. It would be a nice way to give the character a nod without actually fully including her in the story.

Unfortunately the odds of Lady Stoneheart showing up are slim to none, with Martin himself confirming as much to a fan at a convention. She seems to have been lost in the adaptation, but the slim possibility of her daughters carrying on her legacy would be one way for Lady Stoneheart to live on... so to speak.