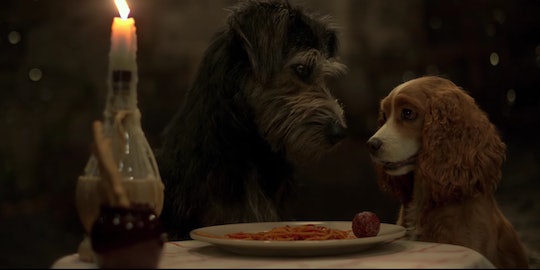 The trend of turning Disney's much-beloved animated classics into live-action remakes continues with the love story of a pampered pup and a street-smart stray. But animal lovers, you may be delighted to hear that the Lady & The Tramp trailer features two adorable dogs, including one who was rescued from a kill shelter.

Before he was Tramp in Disney's latest live-action remake, Monte was reportedly living on borrowed time in a cage a kill shelter in New Mexico, according to People. In fact, the story of how Monte became one of Disney's latest leading men is a tale as old as time, a Cinderella story, if you will. Because just when it seemed most hopeless, Monte was rescued and propelled into stardom as the star of Disney's Lady & The Tramp.

Prior to his debut on the silver screen, Monte was apparently rescued from the kill shelter by HALO Animal Rescue, a no kill animal rescue group based in Phoenix, Arizona. HALO Animal Rescue then cared for Monte until Mark Forbes, an animal trainer working with Disney to cast pups for the upcoming film, spotted him among their adoptable dogs, People reported.

"We started looking at pictures of dogs up for adoption from all over the country," Forbes told People. "Luckily, you can do that all online." Because the character of Tramp is noted to be a mutt, Forbes also shared that Disney wasn't focused on finding a specific breed of dog, but rather looking for one that had a flop to their ears reminiscent of the animated Tramp.

When Monte's picture was pulled up, Forbes claimed everyone agreed that he was meant to "play" the role of Tramp, telling People he traveled to Phoenix to adopt Monte. And the rest is, as they say, history.

"We are all so happy for him and can't wait to check out the movie when it comes out!" Halo Animal Rescue wrote in a post about Monte that was shared to Facebook earlier this month. "His adopters say he's been such a good boy and loving life."

But according to actor Justin Theroux, who voices Tramp in the movie, Monte isn't the only rescue dog to star in Lady & The Tramp. "[Monte] was found by @disney, who was looking for shelter animals to cast in Lady & The Tramp," Theroux recently wrote on Instagram, adding that "there are TONS of rescue dogs" in the film, including his.

Kuma, a pit Theroux rescued from a shelter in Texas, reportedly has a "teensy" role in Disney's Lady & The Tramp along with some other shelter rescues. "A huge thank you to @disney for giving not just Monty, but so many dogs a big break, not just in the movie, but a life outside of the shelter!" Theroux wrote on Instagram.

Brigham Taylor, the film's producer, confirmed that Monte wasn't the only dog rescued and adopted as part of the film in an interview with People. "Once we started turning our attention to casting the main dogs, in that same breath we said, 'We need to rescue as many of these dogs as we can,'" the entertainment magazine reported Taylor said.

What's more, all of the shelter dogs rescued for Lady & The Tramp are reported by Disney's official fan club to have found "forever homes" following filming, CNN has reported.

You can catch Monte and his puptastic co-stars when Disney's live-action Lady & The Tramp debuts Nov. 12 on the media company's new streaming platform, Disney+.