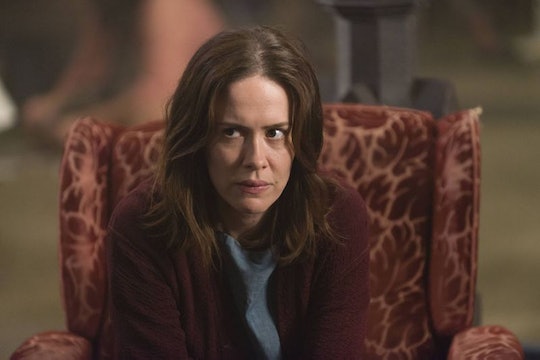 Fans may have thought they knew what to expect going into the season finale of American Horror Story, but they were seriously wrong. The very short promo promised a Lana Winters special, which was certainly a part of the finale, but there was a lot more to it than anyone could have guessed. All sorts of meta media filled in the final hour of the season: clips from various fake shows, Paleyfest panels, YouTube videos. But it was when Lana Winters interviewed Lee on AHS: Roanoke that chaos ensued.

The interview seemed like a calm, collected affair when things began. Lana explained that she came out of retirement to interview Lee, who had refused to speak with anyone else. She started off with less hard-hitting questions about what kept Lee going and what she wanted to do now, but Lana wouldn't be Lana if she stayed away from the tough subjects. Lee and Lana are both women who have lived through hell and made the best of it, lending their conversation an interesting tension as both refused to let the other off the hook for their actions. That certainly could have been enough to keep the interview compelling to watch, but big bombshells and literal gunfire soon spoiled the proceedings.

Things first turned when Lana revealed to Lee that her daughter, Flora, had been reported missing an hour before the interview began. Lee was shocked, but Lana brought it up because she thought Lee had kidnapped Flora yet again and she wanted to know where Lee had taken her. Lee and Flora's grandparents were locked in a custody battle, and if Lee has made anything clear it's that she will do anything for her daughter. Lee wasn't guilty of taking Flora this time, but before she could get any more information the shooting started.

Lee's actions had made her more than a few enemies, but none so eager for revenge as the last living Polk son, Lot. He swore revenge on Lee for killing his brothers and mother and it was during her interview with Lana that he came to enact it. He came charging in with an assault rifle, ready to take Lee out. Lana, however, seemed like she might come to the rescue once again. She has a talent for talking unreasonable people down and she utilized that talent to try and calm Lot. It looked like it was going to work, too, until he hit her across the face with his gun.

The footage cut out before it could be revealed how the situation was resolved, but both Lee and Lana lived through the ordeal. Of course they did — they're both the ultimate survivors.