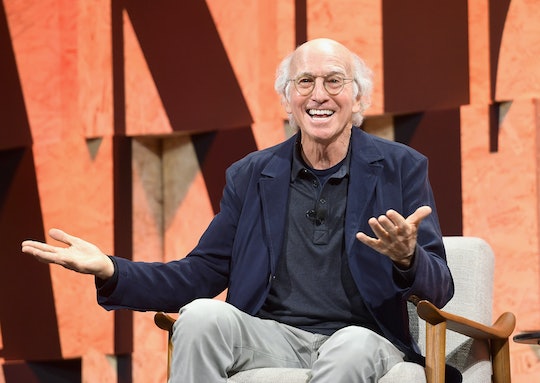 This Political Figure Just Made A Brilliant Comeback on 'SNL'

If you thought Bernie Sanders was out of the spotlight, well then Saturday Night Live is here to prove you wrong, by bringing on their world class Sanders impersonator. Larry David reprised Bernie Sanders on SNL to remind Americans that rampant consumerism is still a thing. And we should all be worried, even on popular daytime television shows. As soon as you learned that David would be hosting the show, you had to know that he was going to make everyone feel the Bern once again, didn't you? After all, who is Larry David without Bernie Sanders these days?

When Sanders first became a household name for his presidential run, he gained huge popularity as a man of the people. With his slightly neurotic tendencies, gray hair, and thick New York accent, David was the obvious choice to parody the politician in Saturday Night Live's political sketches. Like Tina Fey's Sarah Palin or Alec Baldwin's Donal Trump, David's Bernie Sanders became immediately iconic. It became even more iconic when Sanders actually appeared alongside David on an episode of the show in a sketch set on an olden days sinking ship, wherein Sanders got a chance to voice his opinions on Democratic Socialism.

On Saturday night's episode, hosted by David, whose HBO show Curb Your Enthusiasm is currently in its ninth season, David obviously had to bring back his iconic impression. Sanders may not be in the news quite as much as he was back when he was a serious contender for the Democratic party presidential nomination, but he's still relevant enough that David's impression is still just as hilarious (and spot on) as ever.

The sketch took place as an episode of The Price is Right — but with celebrities. David played Sanders alongside a slightly bemused straight man played by Pete Davidson, as the pair tried to guess the price of a washing machine. David's impression started with his Sanders bemoaning the state of the United States of America that this kind of immoral consumerism was being made into a game to be watched by millions on television. "I just want to say this show is a travesty," he stated. "Consumerism disguised as entertainment!" Sanders is known for his less than favorable opinion about consumerism, as well as his pretty stereotypical accent, both of which David absolutely nailed.

Later in the sketch, David had a chance to guess how much he thought a washing machine would actually cost. The other "guests" on the show, including Lil Wayne and Tilda Swinton made a few guesses typical of their own personas. Bernie's impression of Sanders had him take a minor detour into a monologue about the value of a penny. In case you were wondering what the secret to Sanders' success, it's all about the little "take a penny leave a penny" bowl that you see when you go to the gas station. The secret? "You always take a penny," David joked. "And that's how I bought my first house." To be honest, I have heard worse financial advice in my day.

Now just in case you'd forgotten and were wondering how it is that David seems to be an exact match for Sanders, it turns out that the two are actually related. On an episode of the show Finding Your Roots, it was revealed that David and Sanders are distant cousins, which makes so much sense if you really think about it. Those are some very strong genes if you ask me.

David only did one Sanders impression on Saturday night's episode of the classic show, but I have a feeling that the impersonation hasn't gone away for good.