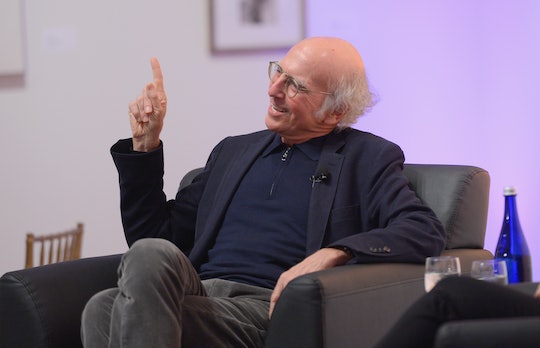 If you were expecting to see Donald Trump in the SNL cold open tonight, you weren't alone. But as it turned out, he was nowhere to be found. Instead, we were treated to Larry David, returning to play Bernie Sanders. And yet again, he did a stellar job. But just minutes later, the comedian and show runner reappeared as himself, and it definitely left an impression. I'm talking, of course, about the moment when Larry David called Donal Trump a racist on SNL during The Donald's opening monologue. Yep, that actually happened. How could you forget that one?

The problem here is, there are literally thousands of Americans who currently feel that Trump is a racist (a claim the candidate has denied repeatedly). Given the fact that there have been approximately 150,000 signatures on a MoveOn.org petition protesting NBC's decision to give a white, male billionaire who is happy to say racist statements and is running for president a free national platform, I'm nonplussed at LD's so-called "joke." Larry David's insensitive comment also kind of makes a mockery of the protesters that were literally standing outside the studio that night. The ones who took to the streets of NYC earlier in the day to demonstrate resistance to Trump's appearance, and called for NBC to dump Trump earlier this week.

Their protests came in response to Trump's many comments so far during the campaign trail about illegal immigrants — comments that many Hispanic groups have found to be racially insensitive. Tonight, according to Deadline, protestors chanted outside, while holding up signs reading "Racism Is No Joke," and "Congrats, SNL Ratings Hotter Than Hell."

Serious stuff. So why are we making it into a joke?

More Like This
Why Is My Vaginal Area Dark?
'Call The Midwife' Has A Fascinating True Story Behind It
If You Like The Letter "E," You'll Love These Girl Names
18 Instagram Captions For Pictures Of Your Kid's First Swim