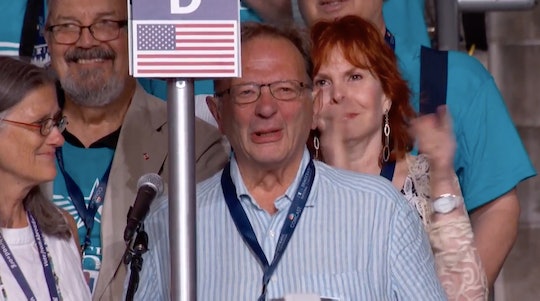 Though the Democratic National Convention got off to a rocky start, things are coming together with the roll call vote, at the end of which Hillary Clinton will be officially nominated for the presidency. But delegates are making sure to thank fellow candidate Bernie Sanders for his work throughout the campaign. And, in the most moving of such moments, Larry Sanders voted for his brother Bernie Sanders during the DNC roll call, tearfully invoking their parents and saying how proud he was of his brother.

Larry Sanders came all the way from Great Britain to stand with the Democrats Abroad delegation and support his younger brother. He drew tears from both himself and from those watching when he stepped up to the microphone to cast the final vote of his contingent, saying,

I want to read before this convention the names of our parents, Eli Sanders and Dorothy Glassberg Sanders. They did not have easy lives and they died young. They'd be immensely proud of their son and his accomplishments. They loved him. They loved the New Deal of Franklin Roosevelt and would be especially proud that Bernard is renewing that vision. It's with enormous pride I cast my vote for Bernie Sanders.

What? No, you're crying.

The elder Sanders brother has made no secret of his pride for his younger sibling over the course of the primary, during which Bernie Sanders managed to garner more attention and voter loyalty than anyone expected going into election season. Larry Sanders, who, according to The Nation, Bernie Sanders credits with introducing him to radical ideals when they were growing up, has been politically active in the progressive scene in Great Britain, where he moved in the late 1960s. He served on the Oxfordshire County Council, and even ran unsuccessfully for Parliament as a Green candidate. He knows well how difficult politics can be, and has fought hard for the ideals upon which his brother built a movement.

In an interview with Rolling Stone back in November, he also teared up while speaking of his history-making brother, saying,

And when Larry Sanders cries, many others cry with him.

Between Larry Sanders' speech and a 102-year-old woman who was born before women had the right to vote casting her vote for Clinton, it was an emotional and cathartic roll call vote, one that did much to honor Bernie Sanders, while uniting the Democratic party behind Clinton as the general election begins.