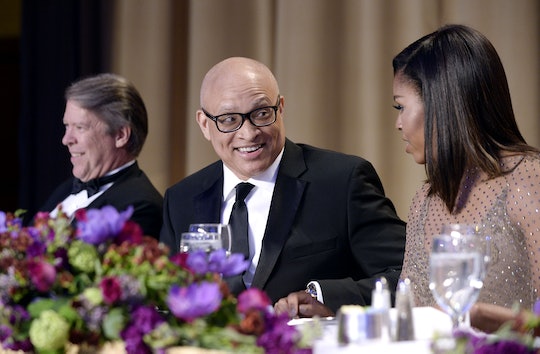 Comedian Larry Wilmore, host of Comedy Central’s The Nightly Show and former “senior black correspondent" for The Daily Show, had the tough job of hosting the annual White House Correspondents’ Dinner on April 30. Known for tackling politically charged social issues with a mix of dry wit and bravery, Wilmore had to work the room of politicos and luminaries with jokes that would read as edgy but not over the top. He had to deliver his zingers at a time when deep partisan divisions have taken over political discourse — and he would be the last comedian to skewer President Barack Obama in his final year in office. No pressure at all. But there was one moment in Larry Wilmore’s correspondents’ dinner roast that showed exactly why he was the perfect pick for the job. And thankfully for Wilmore, it came pretty early in his set.

In remarks broadcast live by C-SPAN, Wilmore made it clear within seconds of starting his roast that the cable media networks — and the state of journalism in general — would be major targets. In case the audience was unfamiliar with his show, Wilmore began by introducing himself in terms they might understand: “I am a black man, who replaced a white man who pretended to be a newscaster. So, in that way, Lester Holt and I have a lot in common.”

And the jokes only got more sharp from there. Of course, Wilmore tackled the low-hanging fruit in the room, covering the Republicans’ tendency to block Obama’s policies and candidates on both sides of the presidential race, but some of the toughest jokes he told before the crowd were about the changes that have happened in newsrooms and sets of the major news organizations represented at the event.

C-SPAN is, of course, carrying tonight’s dinner live. Which is ironic, because most of their viewers aren’t. C-SPAN is the number one network among people who died watching TV, and no one’s found them yet. No, but it is good to be on C-SPAN. Glad I’m not on your rival network, “No Input HDMI-1.”

CNN is here tonight. I’ve been watching CNN a long time. Used to watch it back when it was a news network. I don’t know about you guys, but I can’t get enough of that CNN countdown clock. Now we can see exactly when they hit zero in the ratings.

Later in his set, Wilmore went after broadcasting giant MSNBC for its recent culling of minority hosts, including African-American host Melissa Harris-Perry:

MSNBC is here tonight. Which actually now stands for “Missing A Significant Number Of Black Correspondents.” Am I wrong? They, like, fired Melissa Harris-Perry, they cancelled Joy Reid, they booted Toure. I heard they put Chris Hayes on probation, because they thought he was related to Isaac Hayes.

MSNBC got rid of so many black people, I thought Boko Haram was running that network.

You know, I should say that some of America’s finest black journalists are here tonight. Don Lemon’s here, too. Hey, Don, how’s it going? “Alleged” journalist Don Lemon, everybody.

MSNBC anchor Don Lemon did wave at Wilmore, but he also gave the WHCD host another sign that was a little less friendly.

Probably not the response Wilmore was looking for. Speaking to Vogue about being chosen to host the dinner, Wilmore said that the odd mix in the audience could be difficult to work around. He called the guest list, which included famous names from Sen. Bernie Sanders and House Minority Leader Nancy Pelosi to model Kendall Jenner and actress Carrie Fisher, an “odd witches’ brew of narcissism and power” that could make his writing a more difficult job than usual.

Still, Wilmore — who admitted that he’d been vying for the hosting gig for at least a couple of years — said in his Vogue interview that he’d already crafted a strategy for success:

You just have to take turns at going at everybody. Those crowds are very difficult. I was there last year scoping it out—I was a burglar casing the joint—and it’s hard to tell how it’s going sometimes. I think when you’re up there, you can’t really hear the laughs as well as you would like to, so you just have to pretend in your head that you’re killing and act accordingly.

And within moments of taking the podium on Saturday night, Wilmore made it clear that he was, indeed, out to kill.

Despite the partisan rancor and sniping that sometimes permeates the news coming out of Washington DC, the annual White House Correspondents’ Dinner is the one night when the best and brightest in politics and journalism seem to let it all go and have some fun. But the one thing that any successful White House Correspondents’ Dinner host needs — if the brilliant correspondents’ dinner roasts in past years by comedians like Stephen Colbert, Wanda Sykes, and John Stewart can be an example — it’s the ability to mock without maiming. Wilmore walked a difficult line, and to some at least, he walked it well.

It isn’t often that someone gets to deliver unvarnished truth before such a powerful group. But the annual correspondents’ dinner is just that kind of evening.