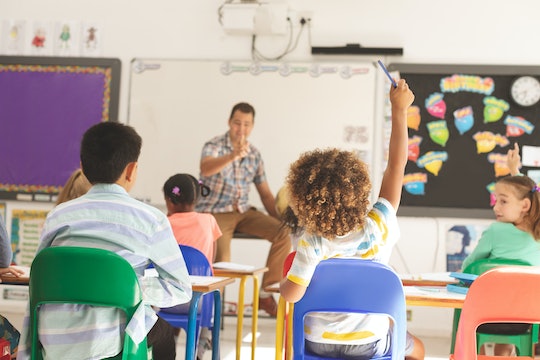 What kid doesn't beg for just five more minutes of sleep on school-day mornings? Well, thanks to Gov. Gavin Newsom, students in California will soon be able to hit the snooze button and catch a few more z's. In an effort to help students get off to a better start in the mornings, the California governor has signed a bill that will soon see later school start times roll out at most public middle and high schools across the state.

Supporters of the law, like Newsom, are hoping that pushing back school start times will ultimately improve kids' educational outcomes by allowing them more time to sleep and recharge. "The science shows that teenage students who start their day later increase their academic performance, attendance, and overall health," Newsom said in a statement to The Los Angeles Times. "Importantly, the law allows three years for schools and school districts to plan and implement these changes."

Anthony Portantino, the state senator who authored and introduced the bill, hailed it being signed into law as a win for the "health and welfare" of California's children in a statement issued via Facebook on Sunday. "This will have a tremendous benefit to student health and academic performance," he said, noting that the bill had been based on "indisputable independent data."

Although not everyone has been in favor of pushing the back the start of the school day at public schools across the state — the California Teachers Association opposed it and a similar bill was vetoed in 2018 by then-Gov. Jerry Brown — experts have noted that children require more sleep than adults to stay healthy. According to the U.S. Centers for Disease Control and Prevention (CDC), the American Academy of Sleep Medicine recommends that children aged 6 to 12 regularly get nine to 12 hours of sleep per each 24-hour period. Meanwhile, kids aged 13 to 18 are recommended to regularly get eight to 10 hours of sleep.

What's more, in 2014, the American Academy of Pediatrics (AAP) recognized "insufficient sleep in adolescents as a public health issue," noting it could impact the health, safety, and academic success of middle and high school students. At the same time, the AAP also endorsed later school start times, noting that there was evidence to "strongly" implicate school days that began before 8:30 a.m. as a key contributor to a student's inability to get sufficient sleep.

"Furthermore, a substantial body of research has now demonstrated that delaying school start times is an effective countermeasure to chronic sleep loss and has a wide range of potential benefits to students with regard to physical and mental health, safety, and academic achievement," the AAP wrote in a 2014 policy statement.

But don't hit the snooze button just yet. The new later school start times aren't expected to go into effect until July 1, 2022, or on the date a school's operative 2020 collective bargaining agreement expires, whichever is later. Additionally, CNN reported that even when the later start times are implemented, schools will still be able to hold optional early-start classes, often known as zero period. Meaning, that for now, students in California will have to continue to skip that extra five minutes of sleep.