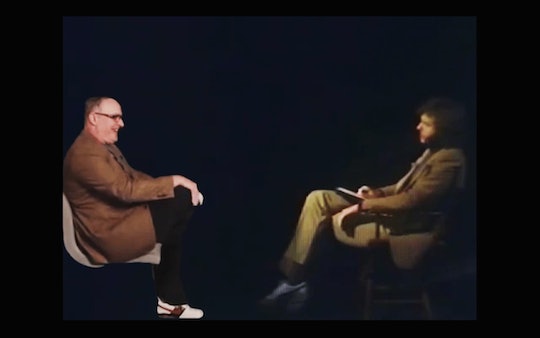 Peter "Stoney" Emshwiller has spent the last 38 years of his life trying to complete a movie project he started when he was just 18 years old — and man, does the finished product look awesome. A teaser video for Later That Same Life, Emshwiller's "time-traveling" memoir film, was uploaded to YouTube just last month, and it's just about the coolest damn thing an 18-year-old in 1977 could project into 2015: Interviewing your future self, and actually getting answers to all your burning questions.

The premise is simple, and yet remarkably clever: When Emshwiller was 18 years old, he recorded video footage of himself interviewing a future version of himself. After a recent health scare that thankfully turned out to be just a false alarm, Emshwiller realized that he "ain't gonna live forever, and that it's time to finish this project." And the Internet is so glad he did.

The raw footage consists of hundreds of open-ended, one-sided questions, along with a number of reactions and responses. He's since spliced together that footage with his answers, now as a 56-year old married man with a long career in entertainment behind him. It's pretty hysterical knowing this project started when Star Wars was still just a neat new space movie (before anyone even knew it would become a multimillion dollar franchise) and then watching Emshwiller whip out his iPhone to show his younger self pictures of his wife, then realizing that the iPhone in and of itself is amazing to behold.

It only gets funnier and more outrageous from there, and even offers an especially poignant moment when 56-year old Emshwiller encourages his 18-year old self to spend more time with his dad before it's too late:

Emshwiller hopes to turn this four-minute teaser into a full-length film, exploring the themes of success, failure, and ambition and challenges us to confront our pasts, no matter how messy that might be.

Check out Emshwiller's crowdfunding campaign for Later That Same Life on RocketHub.