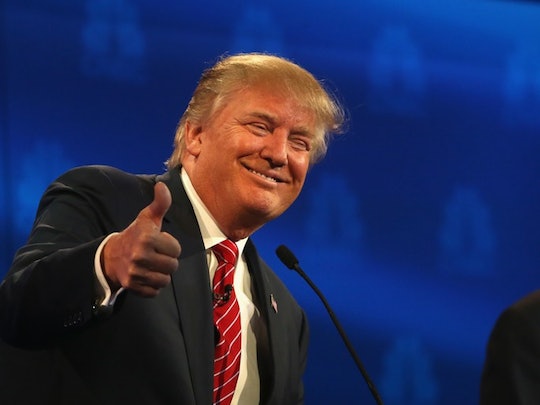 For many, it's hard to imagine anything more satisfying than watching a bunch of adorable kids smash a Donald Trump-shaped piñata. And the activist group, DeportRacism, has done just that with this video. They may look innocent, but you'll notice once you start watching Latino kids insult Donald Trump that they have some less-than-innocent words for him.

These kids have not appreciated Trump's offensive comments about immigrants. Understandable. Ricardo, one of the video's young stars, starts off strong by introducing the controversy, then nailing Trump with a poetic, "F*ck you, racist f*ck." Rosa, his co-star, calls Trump a "racist d*ck." While there's some great shock value in hearing these things come out of these little mouths, there's some real political strength as well. The video opens with Rosa saying, "We're Latino kids born in the USA!" — a group with very little voice or representation.

Update: Trump hasn't responded to Romper's request for comment, but lambasted it while appearing on Fox Business Network's Mornings With Maria, while insisting his record with Hispanic voters is solid: “I think it’s terrible, it’s just terrible ... To have young kids using that kind of language is a disgrace.” He continued: “Anybody that would do an ad like that is stupid, to be honest. I mean, they’re stupid people that would do an ad like that. And it has backfired."

With Donald Trump slated to host SNL this Saturday, this is surely just the beginning of some Trump-bashing. The hosting choice received a lot of backlash from Latino groups who protest giving him even more of a platform for racist remarks, but it seems doubtful now that he'll come out of the night looking good. Even so, the DeportRacism.com Political Action Committee has stated it will pay $5,000 to anyone who yells "Deport Racism," or "Trump is a Racist" during the live broadcast. It's going to be an exciting evening.