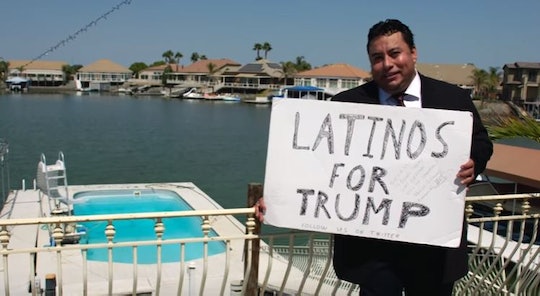 Does the name Marco Gutierrez ring any bells? No? Here's a refresher: Marco Guttierez is the guy who went on MSNBC to talk trash about Mexicans and praise GOP candidate Donald Trump. Spoiler alert: He's Mexican himself. Still don't recall who he is? Well Full Frontal With Samantha Bee just aired a segment with Gutierrez, and in it the "Latinos For Trump" founder said Hispanics are "primitive" and "underdeveloped" — and it's just about the craziest thing you'll see this week in presidential politics. In this election year, that's really saying something.

Gutierrez previously made headlines on MSNBC when, arguing on behalf of Trump's tough stance on immigration, he told host Joy-Ann Reid that if our country doesn't elect Trump as president, Hispanics would inevitably start to take over the country, putting "tacos trucks every corner."

It was a statement so ridiculous, it was almost funny (almost). Taco truck memes popped up all over social media, and real live taco trucks launched voter registration initiatives like Guac the Vote.

But besides being ridiculous, the statement revealed what is perhaps the most damaging and long-lasting impact of the Trump candidacy on American politics: that saying controversial, openly racist, and demonstrably false things is acceptable in our public discourse now. Gutierrez represents an army of Trump acolytes emboldened to go out and spew the most combative of those ideas under the guise of genuine political dialogue. And many now believe that our democracy has less integrity for it.

Here's his full quote, from this week's Full Frontal, in case you missed it:

As Hispanics we are a primitive and underdeveloped culture we'll take whatever we can take if you'll let us.

In the same interview he tells his own story — how he came to the United States from Mexico to join his parents who themselves were undocumented and living in this country. That Gutierrez would then turn and support Trump's hard line anti-immigrant candidacy is almost too galling to be funny.

What the interview actually reveals is what I imagine Trump's real appeal is to a wide swath of his supporters: Perhaps they believe that if they vote like Trump and think like Trump they'll ultimately become their own version of the tinpot dictator. His appeal is totally aspirational.

Gutierrez explains he made money and bought his fancy house after striking it big in real estate. Full Frontal also finds out, much like his hero Trump, Gutierrez has been involved in a long dirty laundry list of scandals and frivolous lawsuits. Gutierrez even admits his highest aspiration: politics. He wants to become the Governor of California.

With just a few weeks left until the Nov. 8 election, it's likely Americans will continue to see the likes of Gutierrez making the rounds on cable TV and news outlets, coming out to argue that Trump is the best person to become president, regardless of any evidence to the contrary.