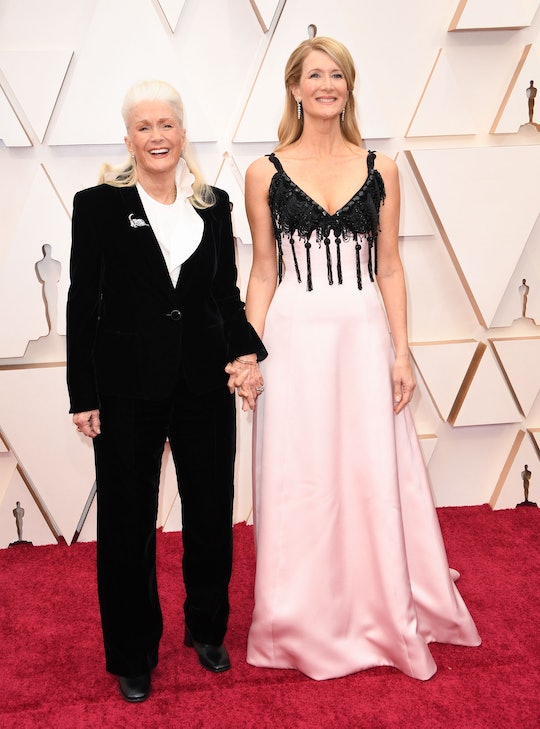 It was incredibly sweet to see Laura Dern holding her mom's hand on the red carpet at the Academy Awards. The Best Supporting Actress winner brought her mom, actress Diane Ladd, as her date to the awards show, which was a serious throwback: Ladd brought Dern as her date to the show in 1975 when she was nominated in the same category for her performance in Alice Doesn't Live Here Anymore.

Dern was just 7 years old when she walked hand in hand with her mom on that red carpet. Although a lot has changed since then (including the fashion), one thing stays the same — their incredible talent and the amazing bond that they share. Dern talked to Vanity Fair about her childhood experience, recalling that it was "scary and overwhelming" for her at the time.

"I also remember my mom feeling proud of herself and loving her work... and I remember thinking, whatever I do when I grow up, I want to really love my job and feel proud of it," she said. "I've never forgotten that."

Dern's acting career is certainly something to be proud of. The actress has been nominated for three Academy Awards, including this year, for her performance in Marriage Story.

Ladd might have been supporting her daughter on the red carpet this year, instead of the other way around — but she wasn't the only one to be there for her. Dern also brought her two teenage children with her as her dates. Dern's 18-year-old son, Ellery Harper, and 15-year-old daughter, Jaya Harper, looked super cool as they posed with her on the red carpet.

Who knows? Dern could very well be her kids' date to the Oscars in the near future. It already happened once and could definitely happen again.