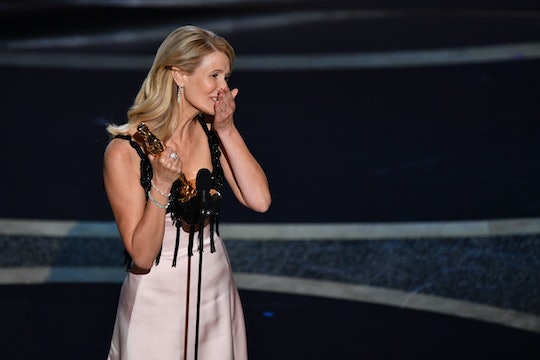 On Sunday, Laura Dern accepted an Academy Award for Best Actress in a Supporting Role for the Netflix movie Marriage Story. But the acceptance speech, in which Dern called her parents her "heroes" was worth an award in itself.

"Some say, never meet your heroes, but I say if you're really blessed, you get them as your parents. I share this with my acting heroes: my legends Diane Ladd and Bruce Dern," she said, prompting cheers from the audience. "You got game. I love you."

And the look on Dern's mother's face said it all. Aside from seeming completely overwhelmed in the moment, it was clear from her tears that Ladd couldn't have been more proud of her talented daughter.

Twitter was moved by Dern's emotional Oscars acceptance speech as well. One person tweeted, "Diane Ladd's reaction — that got to me. If you've never seen Rambling Rose, the film that earned Laura Dern her first Oscar nom and in which she co-stars with Ladd, do so as soon as this ceremony is over. She's remarkable in it."

Another Twitter user wrote, "Laura Dern deserves an Oscar, not exactly for this movie, but for her filmography in general, but really the real reason is simply for the sake of her mum and her reaction to her daughter gaining her first academy award."

Fun fact: This not only marked Dern's first Academy Award, it was the first Oscar for acting in a movie distributed by a streaming service. (Pretty impressive, right?) The actress beat out an impressive pool of contenders, including Kathy Bates in Richard Jewell, Scarlett Johansson in Jojo Rabbit, Florence Pugh in Little Women, and Margot Robbie in Bombshell.

In case you haven't yet checked out the masterpiece that is Marriage Story, I'd like to offer you a snippet from the film featuring Dern's epic monologue. (If this doesn't convince you to stream it on Netflix ASAP, I'm not sure what will.)