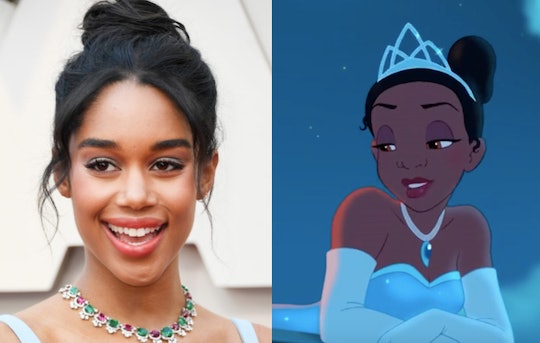 Pink and ruffles ruled the red carpet at the 91st Academy Awards, but there was one look that looked literally regal. Twitter was convinced that Laura Harrier looked just like Princess Tiana at the 2019 Oscars in a stunning blue gown. Whether it was the dress or her updo, or a combo of the two, the public was quick to draw the comparison, calling for the BlacKkKlansman star to play the lead if there was ever a The Princess and the Frog live-action remake.

Harrier is a rising star in Hollywood, first making a name for herself in Spider-Man: Homecoming in 2017 and then in Spike Lee's BlacKkKlansman, the film that earned her the ever-coveted Oscars invite. Lee personally called Harrier to audition for his six-time Oscar nominated film, according to Vanity Fair, and the star managed to get from Greece to New York in a day to tryout for the role. The trip proved worth it, as Lee ultimately offered Harrier the role, leading to her Oscars red carpet debut and the dress that's getting so much attention.

As reported by Town & Country, Harrier wore a custom Louis Vuitton gown that was made in partnership with Red Carpet Green Dress, a company campaigning for sustainable fashion on the red carpet. (A beautiful dress that's also environmentally responsible? Yes please.) The pale blue number was a showstopper, with a sweetheart neck, jeweled detailing, and a steamy slit.

Harrier owned the red carpet in the dress, with publications heralding her as one of the best dressed stars of the night moments after her arrival. For instance, Town & Country and Express both added her to their lists of Oscars fashionistas before the ceremony had even started, and E!'s live coverage mentioned her as a best dressed frontrunner in their closing remarks.

The star clearly looked great, and, of course, Twitter had a lot to say about the look.

The internet was showing Harrier some major love, but soon after she walked the red carpet, tweets pointing out the similarity between Harrier's look and Tiana of The Princess and The Frog started appearing.

The resemblance really is uncanny. From the pale blue color of her dress to the relaxed updo, Harrier was really channeling the sassiest Disney princess out there. Seriously, Twitter could not stop talking about the resemblance.

Listen, I'm with you people of Twitter. Harrier has more than proven her acting chops, and Disney is definitely on a live-action trend. The Jungle Book adaptation was a hit a few years back, and people are abuzz about the Aladdin and The Lion King live-action films coming to big screens this summer.

Tragically, Disney hasn't announced plans to turn The Princess and The Frog into a live movie anytime soon. But they definitely know who to call if they decide to bring Tiana's story back to the big screen. Until then, we'll just have to keep admiring Laura Harrier from home. I'm not complaining.