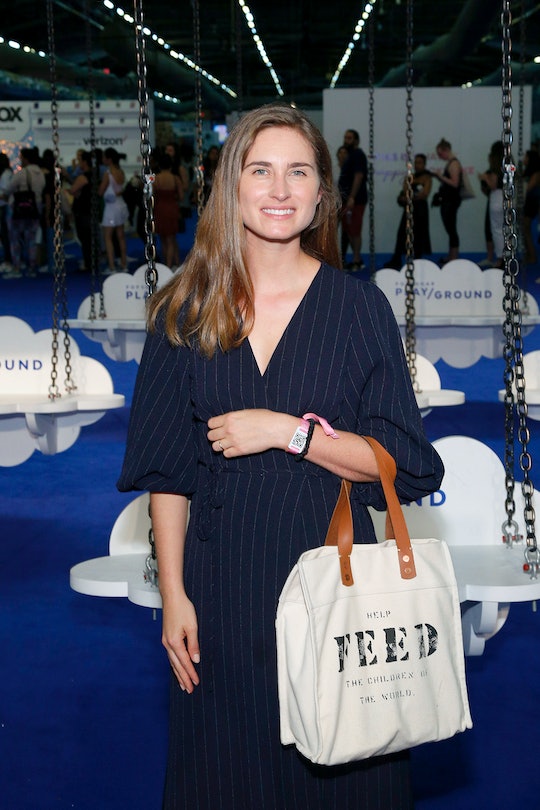 You've probably seen the totes around town, or for sale on the checkout line at Whole Foods during a juice run. Stamped with "FEED the children of the world," the bags are more than just a fashion statement: The proceeds from Lauren Bush Lauren’s FEED Projects line go toward school lunches for children around the world.

A granddaughter of George H.W. Bush, Lauren has made a name for herself in the world of do-gooding as the CEO and co-founder of FEED Projects. Lauren teamed up with her father in law, Ralph Lauren, on a new line in July, Polo x FEED. This month, she launched a new line dedicated to helping children in need: FEED Kids, a range of lunch boxes and backpacks out August 19.

"You know, with FEED's evolution, also it's a massive evolution of people in terms of how people shop and their values and being more conscious consumers," Lauren tells Romper about the growing interest in shopping more meaningfully (even if it's your kid's back-to-school list). "So that's been a neat journey to be a part of as well."

Lauren describes her professional mission to stamp out world hunger. Together with her husband, David Lauren (see also: chief innovation officer at Ralph Lauren), she is raising two small children (James, 3, and Max, 1). Looking on, I really wanted the secret to doing it all. So I asked her.

Lauren laughs, taking the inquiry in stride. She might have a staff at FEED to help her, but she sure understands the struggle of the working mom. “Yeah, honestly, some days are better than others, some weeks better than others,” she says.

"When I'm at work — I'm really at work and present,” she explains. “At home, the same. Once the kids are in bed, I kick it back to work if needed.” Weekends are unscheduled, which allows her and her equally-busy husband time to unwind with their kids. For Lauren, that means “chill — go to brunch — kind of meander.”

I think to be an entrepreneur and start anything you have to have a certain level of grit, and maybe stubbornness and persistence.

In general “just trying to do my best" is how Lauren outlines her approach to life. It’s a much more relatable view than many might expect to get out of a woman who comes from a long line of highly influential people.

The sum of two dynasties (former president George W. Bush is her uncle; Jenna Bush Hager and Barbara Bush are her cousins; and she married into the Lauren clan), she thinks a lot about her legacy. She knew from an early age that she was expected to go out there and, “you know, do something.” So, that’s exactly what she did.

Though she doesn’t have the electoral thirst of the Bush family, her life has been defined by the work of her relatives. Her son, Max, was born two days after her grandmother Barbara Bush's death in 2018; George H.W. Bush passed away that December at 94. "2018 was a hectic one for me personally,” she says of the families’ losses, “but on the flip side, I really got to know my grandparents and had them for as long as I did."

Lauren adds that the qualities she saw in her famous relatives influenced her in many ways: “I think to be an entrepreneur and start anything you have to have a certain level of grit, and maybe stubbornness and persistence," she says.

It was Lauren’s family and friends that made the first orders of the original cotton-and-burlap tote prototype for FEED Projects. The business has since grown into a massive line that includes jewelry, home decor, and travel bags, though the original tote remains the most popular item.

Asked what advice she would give young entrepreneurs who are also trying to better the world, she confesses, "I could use the advice, too.” That’s pretty modest considering that her original goal to engage people in a conversation about hunger being solvable has now blossomed into 107 million meals provided by FEED to date.

Though she is clearly not the braggy type, Lauren admits to wearing her own bags. After Baby #2, Lauren's had to move away from her company's handbags, for obvious mom reasons.

"Right now I'm using our [branded] backpack just because I'm constantly kind of running around the city," she concludes. "Especially now with kids, I think I appreciate [having] the hands free."

The FEED Kids line is available at FEED Projects.

Editor's Note: A previous version of this article did not disambiguate the Polo x FEED and FEED Kids lines. It has been updated.