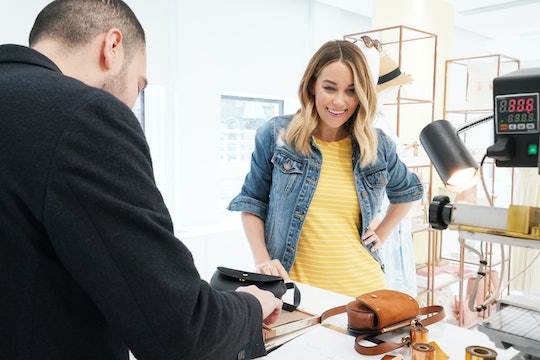 The iced coffee gives Lauren Conrad the sheen of a very relaxed pregnant person. She actually doesn’t look pregnant at all, but I know Conrad is expecting her second child thanks to an April 2 Instagram post in which she cupped the top and bottom of her belly, proof that *something* was growing under that floral tea dress. Her first child, Liam, will be 2 in July, and was dressed as a crow for Conrad’s The Birds-themed Halloween costume last year. Conrad is very deliberate about clothes.

Wearing a bright yellow t-shirt dress underneath a light denim jacket, Conrad is summer underlined for the debut of her latest clothing collection for Kohl’s. The florals, lemons, whites, and “flounces” of the LC Lauren Conrad summer collection give the New York City showroom we sit in a sense of hope, like Manhattan’s flower beds fighting to offset the overflowing trash cans. Combined with that Laguna Beach verve, the summer vibe is potent.

“There was obviously a fruit theme, which we had way too much fun with,” Conrad tells me, gesturing to the buckets of lemons scattered throughout the room. “So a lot of citrus and bananas and watermelon, and we wanted it to feel very summer and fresh.” In the video promo for the collection, she tips a hatful of lemons over her head, and I think it’s needless to say that she has succeeded.

Those who remember watching Conrad on Laguna Beach and The Hills know that fashion was always endgame for the former reality television star, who interned at Teen Vogue on the latter. In 2007, Conrad launched her first fashion line, initially marketed as high-end. Her second collaboration with Kohls came in 2009, but was designed for every-day women, and had the softness we recognize as intrinsically LC — had that sense that she’s happy to be where she is, and who she is.

I don’t ever want to be restricted by my clothing choices. I want to always be able to get on the floor and play with my son.

“Do you think becoming a mom has changed the way you design?” I ask. She takes a moment to explore whether or not there’s a possibility it has.

“I don’t think becoming a mom changed my design philosophy,” Conrad says. What has it changed then? The way she shops. “I’m just looking for clothes that are easily washed. I kind of keep in mind where I’ll be wearing stuff, like I’m not buying as much silk because it just doesn’t hold up.”

To be fair, silk is probably not the easiest fabric to get regurgitated milk out of, either.

But it’s not just about the easiest kinds of clothing to keep clean. For Conrad, she doesn’t want anything — fancy fabrics included — coming between her and her family. “I don’t ever want to be restricted by my clothing choices. I want to always be able to get on the floor and play with my son,” she explains.

While the way she is designing pieces has not changed, Conrad reminds me that she isn’t creating clothes for one specific type of woman. They aren’t for the working woman, or the casual woman, the moms, or the fashionistas. They are for everyone.

“We always try to keep as many people as possible in mind,” Conrad says. “Design for all different styles and body types, so I think it’s pretty much the same.”

Conrad expanded into plus sizes in fall 2017. Bringing size-inclusivity to the line wasn’t just about market expansion for Conrad, though. As she explained to People at the time, “I want the pieces to be things that people can feel good in and feel confident in, and I think sometimes there’s a trend that just isn’t flattering on most people.” For Conrad, she wanted the new sizes to be “accessible and easy to introduce” to any woman’s closet. Trust a pregnant person to tell you if something is accessible or easy.

When I briefly mention Conrad’s maternity line, something she also launched in 2017 but has yet to bring back, she keeps the conversation honest. In short, designing clothing specifically for pregnant woman means only designing for a “limited” customer. She would much rather include styles in her collection that “can be worn while pregnant.” This seems to be a trend with pregnant women: trading in maternity clothes that you can only wear for a few weeks (or months, if you’re lucky) for things you never have to stop wearing, as Who What Wear explored in 2018.

How about a kids line? I bring that up to Conrad next and the same excitement I saw when I first walked into the room immediately returns. It’s obvious this is something she’s been considering. “I think about it a lot. I definitely wanted to have some experience under my belt as far as dressing a child, so when Liam was first born, I definitely had no idea what I was doing,” Conrad tells me. “I am much more informed now because I think that, in order to design for kids, it's best if you have dressed a kid for a while.”

With two years of experience and, soon enough, two kids to dress every day, it feels safe to assume that Conrad is getting more and more comfortable with the idea. So keep an eye on that bucket of lemons.