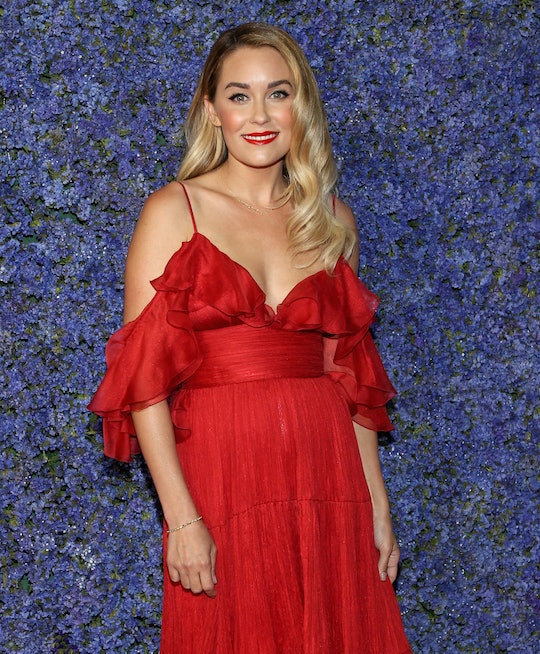 A lot has happened for Lauren Conrad since her days on Laguna Beach and The Hills. For starters, she got married and welcomed her first child in 2017. And on Tuesday, she revealed some more exciting news. In a beautiful post on Instagram, Lauren Conrad announced she's pregnant with baby number two and fans couldn't be any happier for the former reality TV star.

On Tuesday, Conrad took to her social media platforms to share her very exciting news with the rest if the world — she and her husband, William Tell, are expecting their second child in the near future, whenever that may be. The couple, who have been married since September 2014, welcomed their first child, a son named Liam, into the world in July 2017, according to People.

"It's been hard to keep this one to myself!" Conrad captioned the post. "Very excited to share that our family will be getting a little bigger this year."

In the photo, Conrad looks radiant, cradling her bump in a floral powder blue dress. But, her announcement leaves out a few key details — she didn't announce when she is due or the sex of her baby (if she already knows it). So, longtime fans will have to stay to see if she has any more exciting updates to come.

This announcement might come as a surprise to a lot of people. Since leaving reality TV in 2010, Conrad has remained a little more private when it comes to her personal life. Instead of sharing everything about her life for her followers to see, she has been more focused on her businesses, according to Fast Company. So, to see Conrad share this amazing news from her personal life is so nice to hear.

Hearing such news, of course, has prompted Conrad's Instagram followers to flood to the comments to share their well wishes for the second time mom-to-be.

It's hard not to be happy for Conrad, considering how much she loves being a mom. When Conrad was pregnant a little more than two years ago, she told Parents that she was more than ready to raise a little one. "I always thought, 'Someday I'll have a family.' But it wasn't until I was married that it was a real conversation," Conrad told Parents. "I think your 20's are about figuring out who you are and finding a career. Then once I got married, William and I wanted a couple of years to ourselves. When you're a mother, you're no longer your own top priority, and that idea was a little scary to me. But we're ready for a baby now."

You can tell from Conrad's adorable photos of her family that they're so happy together. And with their newest addition on the way, her photos are going to get a lot cuter.

But, Conrad revealed in an interview with Redbook in October 2018 that her life isn't as glamorous as it may seem, especially with a little boy running around the house. "It's really funny to me when people have this idea that I have things very put together," she told the magazine. "My life is a bit of a mess, and I don't broadcast that, but I like it that way."

And her life is about to get a bit messier after she welcomes her second child sometime later this year. But, TBH, it sounds like Conrad is definitely up to the challenge.