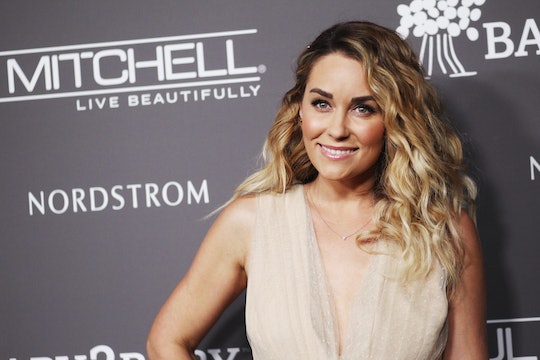 Every mom celebrates at her child's developmental milestones, and chief among them are always their first words. However, much to the disappointment of many mothers who birthed, delivered, and constantly care for their offspring, the first word out of their baby's mouth is... dada. Well, Lauren Conrad says she's OK with her son saying that word first, because, by her logic, he deserves the love, too.

On Dec. 10, Conrad opened up about her son, Liam James, People reported. She told the magazine he's still “in his imitation phase” and is “getting really chatty.”

She continued: "We’ll be talking and saying words to him and he’ll repeat a word and then refuse to say it again ... I think he’s starting to understand the power he holds in this. He’s getting a little sassy in a good way. He’s catching on. He’s a smart kid and putting things together."

She went on to say that though Liam said "dada" before "mama," she's pretty okay with it, because she "deserves" it. "If I ask him, he won’t say Mama, but I know he knows how to say it because he’ll say it when he wants something," she said. "He's learning that he can withhold things. He’s stubborn like I am. I deserve it! We’ll have our whole family over and he decides who gets a kiss and who does not and it’s very funny."

And Conrad really doesn't have anything to feel bad about, because science says there's actually a reason babies tend to say "dada" first. Mother.ly reported that this happens because as babies tend to see themselves as one with their mothers, their first concept of separation comes from their fathers, and when learning language, they identify and learn the words of that which is outside of themselves. (Babies don't learn to identify themselves, or their bodies, until much later.)

It seems Conrad has a great attitude about it either way.

In the same interview with People, Conrad opened up about what it's like to celebrate the holidays with her son, and how she and her family will soon be developing traditions of their own.

"He’s still so tiny," she said. So they "haven’t really developed" their own traditions yet. She continued: "Last year, he was only 6 months so we were still such new parents figuring it out," she said. "We’ll probably start developing them in the next couple years to be honest.”

Last year's holiday card from Conrad and Tell was the first time fans got a good look at baby Liam, according to E! Online. Given that the new parents killed their Christmas tree after just two weeks, as Conrad shared on Instagram along with the family card, it's safe to say they were still settling in to live as a family of three. Here's hoping this year goes a bit smoother.

Though the new mom was super open about where her son is and how they're getting ready for the season, previously, Conrad has been pretty adamant about keeping her son's life out of the public eye as much as possible.

"I'm going to have to figure out how much of motherhood to share on social media," she told Fit Pregnancy. "Obviously you want to protect your child in every way you can. At the same time, my brand is based on being accessible and sharing the milestones of my life, and I'm so excited about it all. I'll find a middle ground."

Though Conrad, like any new mom, is navigating her way through life, family, the holidays, and social media, it's clear she's doing it with tons of style and love... which is really all you can ask for at the end of the day.