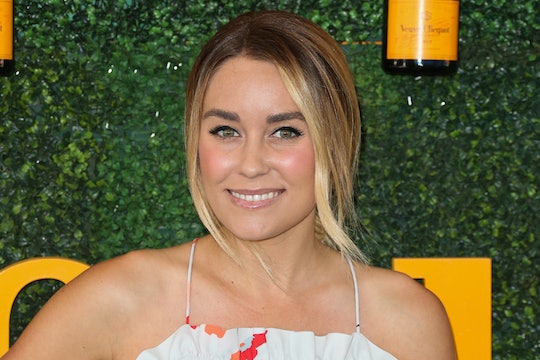 In celebration of Thanksgiving and family, Lauren Conrad shared the first photo of son Charlie Wolf via Instagram Thursday. The snap is the only glimpse fans have seen of Charlie since he made his grand debut on Oct. 9.

Conrad is more of a private person (as she has every right to be), so whenever she posts a pic of her brood, it garners attention. This was the case when she shared a gorgeous family shot in honor of Thanksgiving, captioning the beach scene, "So much to be thankful for this year. Wishing everyone a wonderful holiday!"

There's a lot to love about this photo, but what stands out to fans is the presence of infant Charlie. And although you can't quite make out his face, the little guy looks adorable in his beanie and khakis.

"This is so ethereal," one fan commented on the photo showing Conrad, husband William Tell, 2-year-old son Liam, and newborn Charlie posed in front of the ocean. "Such a beautiful image of your growing family."

Someone else said: "A framer, so beautiful Lauren, congratulations on your sweet family!"

Credit for the stunning photo goes to photographer Jessi Michael-Marie, who shoots for Lauren Conrad Co.

As Conrad mentioned in her post, she has a lot to be thankful this year. Not only did she add to her growing family, but she recently celebrated her 10-year partnership with brand Kohl's. And her firstborn son is thriving, thanks to Conrad and Tell prepping him for big brotherhood.

“He’s very smart, and I think he sort of understands what’s going on,” Conrad told People before in August, before she gave birth. “We’re just focused on making this a positive experience and talking about how exciting it will be for him to be a big brother.”

It's clear Conrad's family is doing better than ever, and it's nice to see Charlie Wolf bonding with his doting crew. Happy Thanksgiving, Conrad and co.!