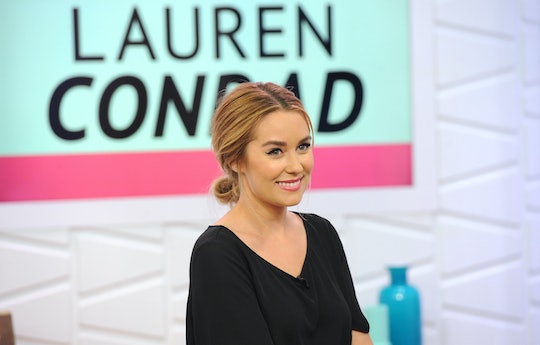 Moms Will Love Lauren Conrad's Thoughts On Her Post-Baby Body

Listen, I know you've probably seen and heard the phrase "post-baby body" so many times, you're about to pull your hair out. And if you're expecting or postpartum, you might feel like there's a special place in hell for anyone who brings it up. But believe it or not, you're going to love what Lauren Conrad said about her post-baby body in the latest issue of People. And yes, I do mean the same Lauren Conrad who authored a "7 Days to Skinny Jeans 2015 Schedule."

Conrad just gave birth to her first child, Liam James, in July, and she told the magazine that she gained 35 lbs. during her first pregnancy. FYI, that's within normal limits for an average or underweight woman according to the American Congress of Obstetricians and Gynecologists (not that Conrad's weight is any of our business, but just in case you're wondering about your own weight gain). Conrad said she plans to consult her doctor in a few weeks before resuming her exercise routine, which is delightfully down-to-earth. She isn't itching to "get her body back," because it didn't go anywhere; it's just different now. "I just made a person," Conrad explained. "It’s fine." And my personal favorite quote: "I’m trying on a new shape."

Women gain weight when they're pregnant. It is very normal and healthy. Even Conrad, who genuinely enjoys exercise and normally eats a diet of chicken, rice, and salad (shudder) had no problem telling People that she chowed down on peanut-butter-and-jelly, macaroni and cheese, and hamburgers while she was creating life. For reference, this is a woman who started her career as a rich, pretty teen on a fake reality show, and now works as a fashion designer. In other words, maybe the last person you'd expect to subscribe to a ¯\_(ツ)_/¯ philosophy about her appearance, which is why it's so refreshing to learn that she has such a healthy attitude about it. She also recently announced that she's adding plus sizes to her clothing line, because people come in lots of shapes and sizes, and that's cool.

And sure, there are some issues of privilege that separate her from the average new mom. For example, she's supposed to be in a wedding two months after having her baby. Other women might choose to bow out or go on an unhealthy crash diet, but she's not sweating it, because her fashion house designed the dresses, so she just plans on ordering a few different sizes. But her perspective on it is commendably laissez-faire: "I have no idea what my body is going to be, I don’t know what shape I’m going to be." No big deal. So the next time you find yourself worrying about losing that baby weight, ask yourself, "If Lauren freakin' Conrad doesn't even care about that, why should I?" You shouldn't! Go kiss your baby and take a nap, girl. You deserve it.