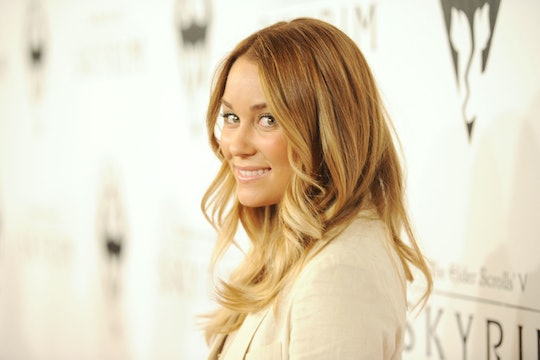 After announcing she's expecting her second child in April, Lauren Conrad took a tiny break from sharing pregnancy updates so she could enjoy this special time in private. Although that's perfectly fine, of course, fans have been eagerly awaiting for more details to surface. Luckily for The Hills alum's supporters, she recently broke her silence to share a bump pic and a little message. As for what Lauren Conrad's pregnancy update reveals? It's clear she's in the thick of the third trimester.

In case you didn't catch the news, the business mogul is eagerly anticipating the birth of her second child with husband William Tell, as E! News reported. The mom is especially excited to give her first son, 2-year-old Liam a sibling, even though he might not understand the concept just yet. "...I think he sort of understands what’s going on,” Conrad told People in August. "We’re just focused on making this a positive experience and talking about how exciting it will be for him to be a big brother." Aww.

But besides prepping little Liam for the coming arrival, there's the matter of getting everything else ready. Conrad touched on this sentiment in a pregnancy update shared Tuesday, in which she posted a beautiful profile shot of herself in a white bikini. In the caption, she revealed she's "currently somewhere between 'Get this baby out of me!' and 'Stay in there kid! We still have so much prep to do!'"

This is SO relatable as far as the third trimester goes. You can end up feeling so physically uncomfortable in the ninth month that you just want to get the show on the road... but then you realize this means giving birth. Oh, and nothing is finished in the baby's room. You can't wait to see your baby's face, of course, but it's a lot to take on overall.

I wasn't the only one who was able to relate to Conrad's maternity overload in the face of a life-changing event. I'm right there with ya, 36 weeks over here!" wrote one fan on social media, while another joked that the "decision is almost as difficult as Jason or Paris!" LOL.

The good news for Conrad? She has a lot to distract her at the moment. Not only did Liam just start preschool (it was an emotional moment for the designer, BTW), but she's busy managing different businesses and other creative pursuits.

Plus, I have no doubt Conrad will forget all about these third trimester blues as soon as her little one arrives. She does adore motherhood, after all. “It’s been great!” she said shortly after Liam was born in July 2017. “Honestly, it’s exactly as everyone describes it. It’s the best and hardest thing you’ll ever do.”

She continued, “It’s amazing. You fall so in love with your tiny person — it’s a whole new life.” Talk about a sweet sentiment, right?

Circling back to Conrad's third trimester dilemma, I wish her the best during these next few weeks. It can be a doozy, that's for sure. Good luck, Lauren!