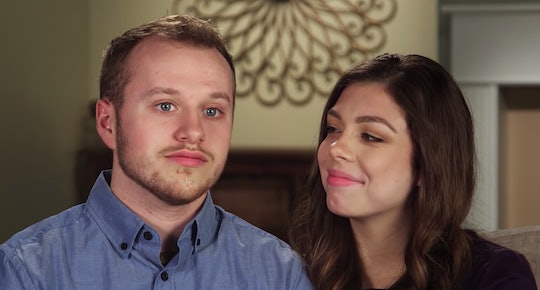 On Father's Day, plenty of people take to social media to honor the amazing dads in their lives. Whether it's with photos, endearing words, or quick shoutouts, posting on the third Sunday of June is a simple way to publicly acknowledge what how these fathers have influenced your life. Unsurprisingly, many celebrities take part in this type of social media post, as well. And Lauren Duggar's tribute to husband Josiah on Father's Day honors their rainbow "angel" baby.

But first, a little backstory is in order. In case you've lost count, Josiah is number eight in the Duggar sibling lineup. He and Lauren Swanson tied the knot in June 2018 in typical Duggar fashion — after announcing their courtship in January and their engagement only two months later, according to People. In February, the newlyweds revealed Lauren had suffered a miscarriage. Just a few months later, Josiah and Lauren revealed that they were again expecting a child.

On Sunday, June 16, Lauren wrote a sweet Father's Day tribute to her husband, OK! magazine reported — and she made sure to include the baby they had lost. "Happy 1st Father’s Day honey!" she captioned a photo of herself and Josiah each with their hands on their own "bumps." "I’m So proud our children have you as their daddy! ❤️ #happyfathersday #angelbaby#rainbowbaby."

And you can bet Josiah did the same last month on Mother's Day.

"To my dear Lauren... Happy 1st Mother’s Day!" he wrote. "I have seen you love, protect, and how much you have given without getting anything in return. I wish our sweet baby could’ve seen just how wonderful a mother you are. Not all mothers arms get to hold their little one, or get to hear their baby’s laughs and cries. You may have missed out on these things since our baby was called home to be with Jesus, but you ARE a mother. I love you Lauren!"

Josiah and Lauren first opened up about the miscarriage via Instagram and with a video that aired on TLC's Counting On. "So about a couple months ago, we found out we were expecting. But suddenly thereafter, we found out we lost our baby," Lauren said to the camera while standing next to her husband.

"It really was a hard time for our family, just going through this right after we got married," Josiah added. "And all of the dreams of getting to see our little one and hold it in our hands were dashed before our eyes."

"We really wanted to share our story because we know a lot of people go through miscarriage, but nobody really talks about it," Lauren continued. "And so we just wanted to let ya'll know that you're not alone."

At the time, the couple also shared a message via Instagram explaining that Lauren had miscarried. They revealed that initially, they were hesitant to share about their loss. "At first, we kind of wanted to just stay quiet about the news, but knew that since everyone is anticipating for us to announce that were having a baby, we felt like it was time that we told everyone that our first and only baby is in heaven," Lauren and Josiah wrote. "It is hard to hear when people asks us if we are expecting, when we only recently lost our baby. You can imagine it was devastating to the both of us."

As someone who has experienced a miscarriage, I admire the fact that Lauren and Josiah decided to open up about their loss. Although everyone grieves the loss of a pregnancy in their own way, talking about it can be healing — as well as eye opening. Because it happens much more frequently than so many people realize. My thoughts are with Lauren and Josiah as they continue to process the miscarriage while also preparing for the baby they're expecting.