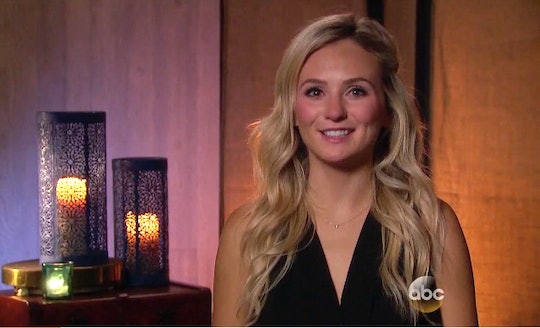 Things are getting super intense this week on ABC's The Bachelor, and now there's been a declaration of love, too. During a private confessional, Lauren said she loves Ben, and it's clear that things are heating up on his end, too. This week, there were only six contestants remaining, and Ben took the ladies to his hometown in Indiana, which he referred to as the “place that helped form me into the man I am today.”

It was in this magical man-forming locale that Ben asked Lauren on a one-on-one date. He proceeded to take her around his hometown as if she was his high school girlfriend. They drove through the streets in his pick-up truck as Ben regaled Lauren with a cute story about his first kiss. They then took a gander at the high school itself, stopped by the local church, and played basketball with a bunch of kids at a nonprofit group at which Ben used to volunteer. When Ben told Lauren that he was the quarterback for his high school's football team, Lauren seemed especially excited.

Later, while Ben and Lauren were playing basketball with the kids, Lauren even watched as Ben consoled a little boy who is crying. (This excited her even more than the quarterback thing, because, you know, it meant that he was definitely "father material"... maybe.)

“Today was a true breakthrough in my feelings for Ben... I’m in love with Ben,” Lauren told the cameras at the end of the date — which made it all pretty epic, as far as Bachelor moments go. (NBA stars Paul George and George Hill were there, but that's another story.)

The good news is, the feeling seems to be mutual. "I’m really not questioning who Lauren is anymore," Ben said during the episode. "I know the true Lauren, and she is amazing."

That's great... right? Problem is, the second Ben was done with Lauren, he whisked JoJo away on a one-on-one date in Chicago. It seems that he had rented out Wrigley Field, home of the Chicago Cubs, and the two proceed to get all lovey-dovey as though they were the only two people on earth.

What's more, Ben gave JoJo a personalized jersey that said "Mrs. Higgins" on the back. "Mrs. Higgins sounds good," JoJo said. (Uh oh.) By the end of their romantic evening on the infield, JoJo was ready to give a declaration of her own. "When I’m with Ben," she said, "I feel myself falling in love.” If you take a moment to analyze that sound bite, it's weirdly vague. Like, does she no longer feel like she's in love when she's not Ben? When he leaves the room, is she out of love? No one really knows yet.

So, to recap, Lauren loves Ben, JoJo might love Ben, and Ben might love both of them. Obviously, we're headed for quite the finale here, and you can bet we'll all be tuned in to see what happens.