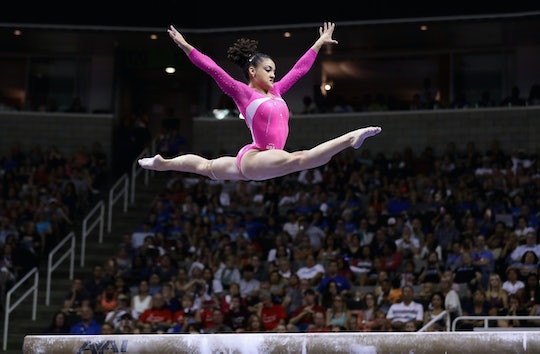 As the world's focus shifts to Rio's 2016 Olympic games in August, all eyes are on Laurie Hernandez, the 16-year-old New Jersey native who will be the youngest member of the U.S. women's gymnastics team. The rising star is receiving attention from fans and stars alike, but Laurie Hernandez's Twitter and Instagram posts show that all that fame clearly hasn't gone to her head. While retweeting the praise she's received from the likes of Orange is the New Black's Laverne Cox and Pretty Little Liars' Lucy Hale, Hernandez herself remains remarkably grounded, sharing her love for her friends and family (and the occasional goofy gif).

Hernandez began studying gymnastics at age 5, according to NBC, and when she was 9, her coach, Maggie Haney, started the process of getting Hernandez into a USA Gymnastics’ national development camp. It was then that Haney learned that her protégée had the top Talent Opportunity program score in the country. By age 13, Hernandez was earning medals. Various injuries kept her out of practice the following year, but she went on to enter and win four competitions in 2015, including five medals at the national championships (two gold, one silver, and two bronze). She joined the U.S. senior women's team as soon as she met the age requirement in June, and qualified for the Olympics in July.

But setting aside the images of Hernandez and her team flying through the air during their incredible routines, her social media feed reads like the most wholesome, normal American teen one could imagine. She's riding a bike, she's jumping in pools, even posting about how much she loves her parents and siblings. What a weirdo, right?

Though Hernandez' childhood was anything but normal– she's been home schooled since the third grade and practices gymnastics for up to six hours, six days a week — by all accounts, she still turned out to be a pretty typical kid. "She makes funny faces," read a June New York Times profile. "She likes to color. She loves to paint her nails." In the accompanying interview, Hernandez talks about her love of ice cream and likens herself to a 5-year-old. She still goes trick-or-treating on Halloween.

Somehow, Hernandez has cracked the code of how to be a world-class athlete and a normal kid at the same time. In an interview with NBC Olympics, she illustrated this perfectly, vacillating between the two sides of the coin with ease: her favorite restaurant is the local Tex Mex joint, but her normal diet is oatmeal, brown rice, "some sort of healthy meat (usually grilled chicken)." She loves going to the mall, but her favorite places are "Italy, Japan, and Mexico." She has crushes on Liam Hemsworth and Zac Efron, and a "piece of a cadaver" in her knee. Laurie Hernandez has figured out how to do it all, at a far younger age than most people.