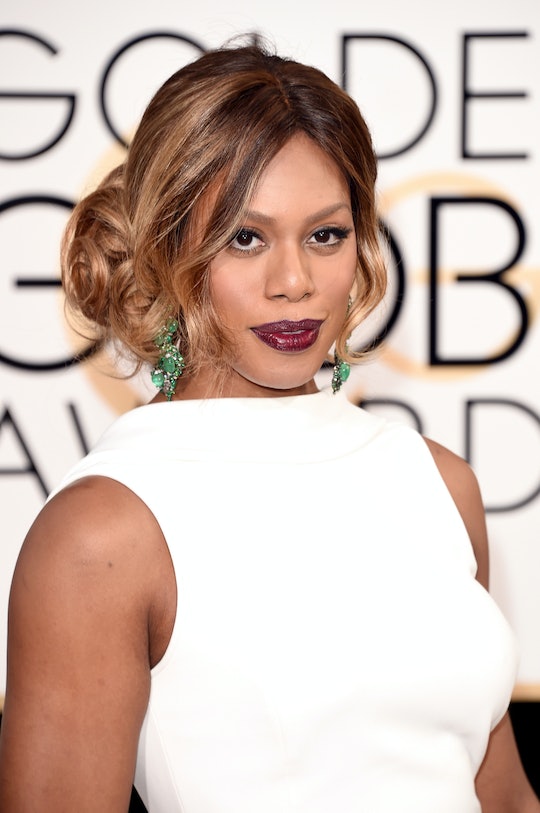 Laverne Cox’s Golden Globes Dress Is Gorgeous, But Her Message Was The Real Stunner

Her Litchfield prison jumpsuit may not be the hottest outfit, but Laverne Cox's 2016 Golden Globes dress was a true stunner. The Orange Is The New Black actress is known for her impeccable style‚ both on and off the red carpet, and her gown at Sunday's award ceremony did not disappoint. This was Cox's first appearance at the Golden Globes, and even though she wasn't nominated, she clearly stole the show. (Or rather, she earned the show because she was the definitely of "working.")

Cox stunned in an all-white sleeveless Elizabeth Kennedy gown, with a high neck and beautiful train. (Seriously, girl could twirl in that number.) To add a little color to the look, Cox paired the gown with emerald-green Lorraine Schwartz earrings. She finished the look with a loosely styled updo and a dark lip, solidifying Cox's place as a must-watch woman on the red carpet.

Her recent Golden Globes look adds to a long list of stunners, like her embellished rose satin gown at the 2015 Screen Actor's Guild Awards, her gorgeous blue gown at the 2015 Emmys and, well, just about anything else the Orange Is The New Black actress have ever worn. It wouldn't be surprising if Cox made all the Best Dressed lists tomorrow morning. But even if she doesn't, we think she was true perfection.

Laverne also took the opportunity to get real on the Golden Globe red carpet, and send a loving message to her fans: "Your lives matter, your voices matter, your stories matter," she said during her interview with Ryan Seacrest.

Stunning and articulate. She's already a winner in my book.