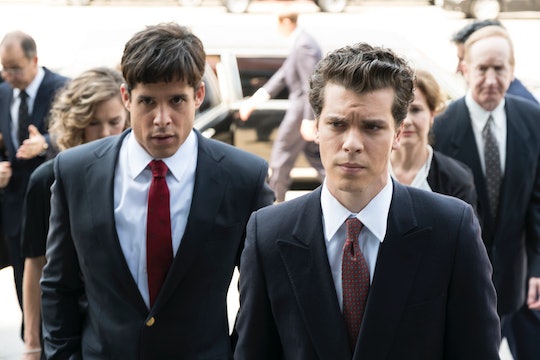 What 'The Menendez Murders' Actors Look Like Vs. Their Real-Life Counterparts

Law & Order has always taken inspiration from the headlines, but transformed the stories by fictionalizing them — changing names and details so the connection between fact and fiction was little more than implication. Now, however, the franchise is taking a deeper look at an actual case with Law & Order True Crime. The entire first season will be devoted to the Menendez murders and the resultant trials that sparked a media frenzy. If the series is faithful to what happened, then it will need to reflect the way the real people looked. Checking out Law & Order True Crime: The Menendez Murders' actors vs. the real people shows how close they got.

On Aug. 20, 1989, Lyle and Erik Menendez made a hysterical 911 phone call after finding their parents Jose and Kitty dead in the family home in Beverly Hills. The crime went unsolved for months, with no one able to come up with a potential lead, until the suspicious behavior of the brothers started to raise eyebrows. They spent money wildly, buying cars and Rolexes and even a restaurant. Eventually Erik confessed to his therapist Dr. Oziel that he and Lyle had shot their parents, which Oziel's girlfriend ended up revealing to the police. Erik and Lyle were subsequently arrested, but the story was far from over. Their televised trial — and the things that were revealed during it — captured the public in way that wouldn't happen again until the O.J. Simpson case.

Though there were many people involved in the story of the Menendez murders, there were three people who were the most central: Lyle, Erik, and defense attorney Leslie Abramson.

Erik was the younger of the two brothers; he was 18 at the time of the murders, and still living at home with his parents. In Law & Order True Crime, Erik will be played by Gus Halper — and the resemblance isn't bad at all. Though like most actors playing real people, Halper is more TV-ready, he's definitely got the right look to play Erik.

Lyle was 21 years old when he and Erik killed their parents, and had recently returned to Beverly Hills from the east coast, where he had been attending Princeton before getting suspended for plagiarism. He'll be played by Miles Gaston Villanueva, who, with the help of a wig, looks a lot more like Lyle.

Edie Falco will play Leslie Abramson, who led the defense for the brothers (though she was primarily Erik's lawyer). Abramson was known for being a dynamic figure in the courtroom, and she exposed details of the Menendez family that no one had known — and not everyone believed. She argued that the brothers had been sexually abused by their father and that had been the motive for murder; it wasn't just a yearning for their inheritance, as the prosecution claimed. Abramson wasn't able to convince the jury so the claim was never proven, but she remained the driving force of the case. And in her curly blonde wig, Falco definitely calls Abramson to mind.

Though this isn't everyone involved in the Menendez case — some of the figures will even be familiar, like Los Angeles district attorney Gil Garcetti and journalist Diane Sawyer — these three are the key players. It seems like Law & Order True Crime: The Menendez Murders has done its best to capture what they looked like, so it stands to reason that every other real person involved will be represented faithfully, too. The look is right, so all that matters now is that the story is told with just as much attention to detail.