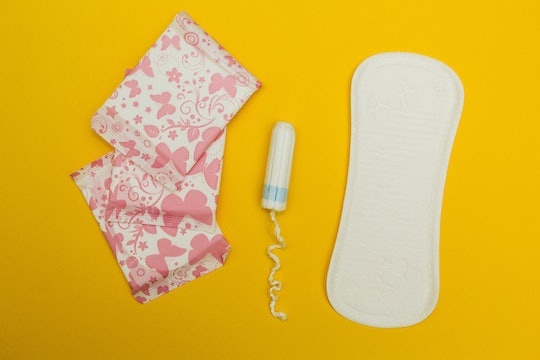 What exactly goes into the personal care products many turn to during menstruation? In an effort to better inform consumers about the products they use, New York has become the first state to demand greater transparency on period products like sanitary napkins, tampons, and pantyliners. Thanks to legislation signed Friday, also International Day of the Girl, Gov. Andrew Cuomo made it so menstrual products sold in New York must list ingredients plainly and conspicuously on their packaging.

For anyone who menstruates, menstrual hygiene products aren't a luxury — they're a necessity. Need proof? Consider the fact that women in the United States alone are reported to spend roughly $3 billion a year on sanitary protection products, according to the nonprofit, nonpartisan National Center for Health Research. Despite the industry's booming sales, tampon and sanitary pad manufacturers are reportedly not currently required to disclose their ingredients on their packaging, according to HuffPost. (It should be noted, however, that the U.S. Food and Drug Administration, which regulates pads and tampons, has been clear to state that it "views any marketed tampons that comply with FDA requirements, including FDA premarket review, to be safe and effective when used as directed.") So, while some brands like Always list their ingredients online, it can be hard to know exactly what's in the product you're looking at when you're standing in the store.

"Practically every product on the market today is required to list its ingredients, yet these items have inexplicably evaded this basic consumer protection," Gov. Cuomo said of menstrual products in a statement released by his office Friday. "It's part of the pervasive culture of inequality in our society that has gone on for too long, and that injustice ends today as we become the first state in the nation to mandate ingredient disclosure and empower women to make their own decisions about what goes into their bodies."

In a press release put out Friday, the governor's office alleged that some menstrual products like pads and tampons "may contain toxic and allergenic chemicals that can cause significant health concerns." For this reason, Cuomo had opted to mark International Day of the Girl by signing legislation mandating that all menstrual product packages or boxes sold in the state of New York have "a plain and conspicuous printed list of all the ingredients in the products." The law is set to take effect 180 days after today's signing, but will give manufacturers 18 months to roll out packaging or labels that include ingredient lists.

"We want to make sure the ingredients in menstrual products are transparent and safe for young girls and women," New York Lt. Gov. Kathy Hochul said in a statement. "With increased access to menstrual products and disclosure of ingredients, we are addressing the issue and the stigma, and continuing to ensure equality for all women and girls in New York."

The law is meant to build on previous reproductive health protections safeguarded by the state of New York, according to the governor's office, like a law requiring schools that include grades six through 12 to make menstrual hygiene products available to students free of charge. Additionally, Gov. Cuomo said he hopes the law will inspire other states to follow suit with similar policies, saying New York was "proud to lead the nation by advancing these critically important new protections."