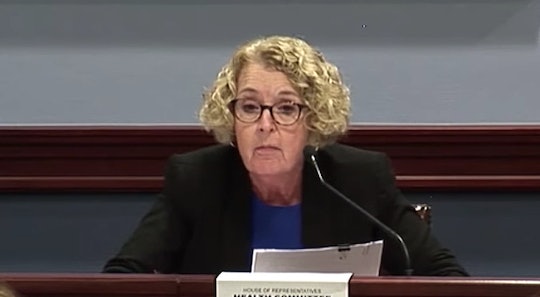 Lawmaker's "Insensitive" Remark About Miscarriage Inspires Women To Speak Out

Pregnancy loss is a personal and sensitive topic for many, which explains why one Pennsylvania lawmaker's comment comparing an early miscarriage to "some mess on a napkin" has inspired countless women to share their stories. And no matter where you might fall politically, I think it's fair to say this controversy has sparked an important discussion surrounding miscarriage, which is still commonly viewed as a taboo topic.

On Oct. 29, Pennsylvania Rep. Wendy Ullman, a Democrat, participated in a hearing on Pennsylvania House Bill 1890, "which would require healthcare facilities to bury or cremate the remains of fetuses that died via abortion or miscarriage," according to TODAY. Ullman, who is against the bill, stated during her argument, according to Penn Live:

"I think we all understand the concept of the loss of a fetus, but we're also talking about a woman who comes into a facility and is having cramps and, not to be concrete, but an early miscarriage is just some mess on a napkin. And I'm not sure people would agree that this is something that we want to take to the point of ritual — either cremation or internment."

Before I get into the comment itself, here's a little background on these fetal remains bills and how they factor into the abortion debate. In 2016, then Indiana Gov. Mike Pence signed into law a bill requiring constituents to bury or cremate fetal remains following an abortion or miscarriage, according to The Nation. Pence said the bill was designed to give remains "dignity," while pro-choice advocates argued it was another example of anti-abortion legislation.

Additionally, this kind of bill gives fetuses personhood, which is a slippery slope in the fight for women's rights.

In an essay for Slate, director of the Center for Biology and Society at Arizona State University Jane Maienschein highlighted the Indiana law's problems succinctly, stating, "Yet requirements about disposal of fetuses pose undue emotional and practical burdens on women. Women who have just suffered a miscarriage or gone through an abortion must make additional decisions about what happens to the dead fetus, even when they consider it just a dead fetus and not deserving of any special treatment."

What's more? These requirements could up the cost of an abortion, circling back to the seemingly true purpose of these bills: to limit a person's ability to get an abortion. And for those who miscarry? This law forces them to participate in state-mandated mourning, without considering their feelings about the loss.

That all being said, Ullman's comment wasn't worded in the best way. And many felt Ullman was discounting the emotional and physical pain some people experience during an early miscarriage, sharing their outrage on Twitter.

"I’ve had 2 early miscarriages & I can assure you that both losses were more than 'just a mess on a napkin,'" one person wrote. "The emotional & physical pain was something I wouldn’t wish upon my worst enemy."

Someone else tweeted: "I lost a baby at around 7 weeks gestation. I was amazed at the torture & pain my body went through as it expelled the fetus & all remaining pregnancy tissue over the course of about 4 days. If you have no clue about an experience, DON’T SPEAK ON IT."

"I had a twin miscarriage at 9 weeks. It required 2 surgeries to remove my babies who no longer had a heartbeat," a commenter recalled. "The amount of blood and tears that were shed is something I will never forget. I can assure you it was more than just 'some mess on a napkin.'"

And countless others labeled Ullman's remark as "insensitive."

As for Ullman's response to the controversy, she penned an apology letter on Twitter, admitting her words were "poorly chosen."

"In a discussion in the committee meeting earlier this week, I chose my words poorly and for that I apologize," she began her message. "Many women and families find tremendous comfort and solace in ritual burial or cremation in the case of early miscarriages, but others do not."

She continued, "Some would choose donation for medical research, like my family friend, who I quoted in a committee meeting, saying, 'So my loss can have meaning.'"

Ullman explained how her friend's story nearly brought her to tears, and the emotional weight of the discussion is why she struggled to find the right words.

"This issue is intensely important to me, and that’s why I struggled for words," she concluded. "My words were poorly chosen, and I apologize. I remain steadfast that every single step of a medical process, including the handling of remains, should be decided by a patient and her doctor."

Ullman did not immediately respond to Romper’s request for additional comment about the controversy.

Ullman's words might have been poorly chosen, but it doesn't negate her valid concerns about Pennsylvania House Bill 1890. And I think there's a good chance she'll use more careful language to illustrate her argument going forward.