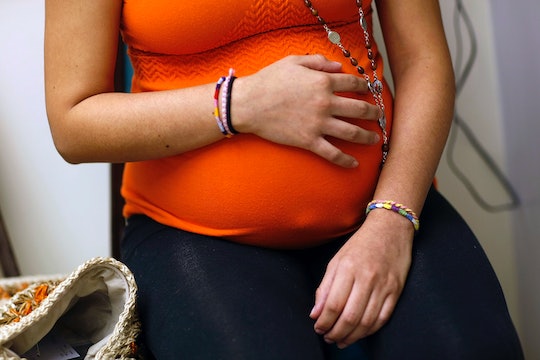 On Monday, eight male South Dakota lawmakers voted down a bill that would have required reasonable accommodations for pregnant workers so they can safely keep working, according to Think Progress. During a hearing, Republican state Rep. Wayne H. Steinhauer, who voted against the bill, reportedly said “It’s not prison. You can quit." Thanks for the tip, buddy. But he wasn't the only one — there were several state lawmakers who appeared to agree that pregnant women can quit their jobs if they experience discrimination or if their employers are unwilling to provide reasonable accommodations at work.

Instead of suggesting protections against discrimination, unsafe conditions, and getting fired, Steinhauer said, according to Think Progress:

"You’ve got a choice every day. You make a choice whether you come to work,” he went on. “And I’m here to tell you, if a person’s not allowing you to breastfeed at work or making appropriate accommodations at work, we can pass this law, but you don’t want to work for that guy. Get the heck out of there."

Steinhauer did not immediately respond to Romper's request for additional comment.

Because it's so easy to just go out and get a different job, right? Regardless of the fact that discrimination against pregnant employees, like firing someone for becoming pregnant, or refusing to give her reasonable work accommodations, is against federal law in the first place. Just quit your job! No need to address the issue or force companies to understand that discriminating against pregnant workers won't be tolerated.

According to Rewire, the vote to shelve a bill requiring reasonable workplace accommodations during and after pregnancy was 8-3, and the panel of state lawmakers was made up of — shocker — all men. The accommodations in question can include frequent or longer breaks, a modified work schedule, and a private non-bathroom space to be used for breastfeeding.

So instead of actually dealing with the issue of discrimination, these lawmakers seem to think women should just handle it, most specifically by, as Steinhauer suggested, quitting. But although South Dakota's unemployment rate is one of the lowest in the country, it's still no easy feat to leave a job, especially if you're also dealing with the demands of a pregnancy. Many workers don't have a "rainy day fund" to live on during a job search, so simply walking off the job because an employer is — again, according to federal law — illegally refusing to give reasonable work accommodations is just not an option for many pregnant people.

The U.S. Supreme Court recently held in Young v. United Parcel Service that employers that don't accommodate pregnant workers with medical needs violate the Pregnancy Discrimination Act of 1978, which outlawed pregnancy discrimination. But some employers may still not offer the accommodations a worker may need while pregnant. And if you ask Steinhauer, if they don't? Just quit, no big deal.

And it's not like this is some hypothetical situation that the lawmakers involved were voting on with no real-world examples. According to Rewire, Samantha Spawn, the interim executive director of NARAL Pro-Choice South Dakota, shared her story with lawmakers:

...extreme dehydration at a former waitressing job sent her into emergency labor when she was eight months pregnant. She said the bill guarantees the right to reasonable accommodations, like more frequent breaks, potentially averting cases like hers.

I know that my experience is not unique. Many women I have talked to have similar stories.

Shouldn't the goal of the lawmakers be to strengthen policies that should already be in place, thanks to federal law, rather than avoid the issue altogether and just tell those who are pregnant "tough luck"? Steinhauer doesn't seem to think so. His constituents might be interested in contacting him to let them know what they think of his vote on this issue.