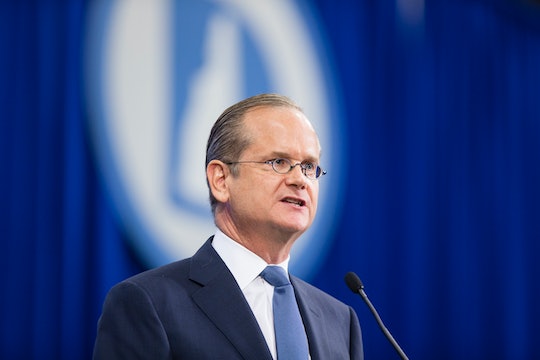 Lawrence Lessig No Longer Running For President, To The Surprise Of No One

On Monday, Lawrence Lessig dropped out of the 2016 presidential race, bringing an end to a campaign that many didn't even know was happening. Despite the fact that the Harvard professor entered the Democratic race two months ago, and raised over $1 million via crowd-funding in 30 days, it seems he lacked what most candidates have been complaining about this election cycle: More time. (Ahem, Mike Huckabee and Jim Webb.)

Lessig announced he was dropping out via a video, in which he said his efforts were thwarted by the fact that he wasn't invited to participate in the debates. "I must today end my campaign for the Democratic nomination and turn to the question of how best to continue to press for this reform now," he says in the video. "I wanted to run for president as a Democrat because the values I champion are shared by all Americans but especially by Democrats. But it is now clear that the party won't let me be a candidate, and I can't ask people to support a campaign that I know can't even get before the members of the Democratic Party."

Of course, the news comes to no shock to anyone paying attention the election and the impact that much heavier hitters like Hillary Clinton and Bernie Sanders are making in the road to Iowa. It's not even a shock to Lessig himself. In his video, Lessig admits that, "I may be known in tiny corners in the tubes of the Internet, but I am not well-known to the American public generally." Hence why the debates would have been so important to Lessig's campaign.

Though he's moving on, he's no less worried about the future of our country, and even claims that his former competitors are not going to solve the problems the U.S. currently face. "Until we end the corruption that has crippled Congress, none of their promises are even credible," he says in his video.

But it's not only the lack of face time that hurt Lessig's campaign. He also earned criticism for comments that he would resign the presidency if elected if his campaign finance reforms — which he called the Citizen Equality Act — were passed. (He later backtracked from those comments, calling them "totally stupid.")

Of course, the fact that the most press Lessig ever got was for dropping out of the race certainly didn't help matters.

More Like This
The President Of Ireland Wants To Get Rid Of Homework & Honestly, He's Onto Something
Jessie James Decker's Husband Is Worried A Vasectomy Will Take Away His "Power"
Keke Palmer Casually Drops Her Baby's Sex On Jimmy Fallon
Josh Duhamel Is Glad He Took Fergie's Advice About Dating After Divorce
What Parents Are Talking About — Delivered Straight To Your Inbox