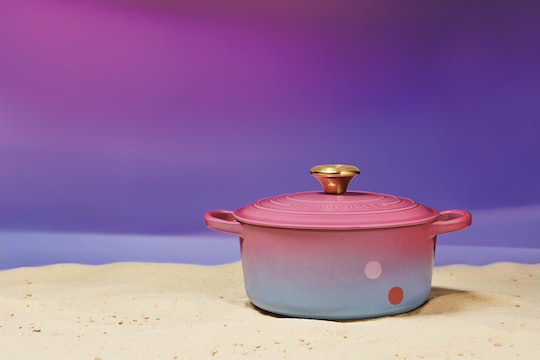 Coming at you from a galaxy far, far away, the latest Star Wars collection is taking over a brand new universe: your kitchen. The Star Wars X Le Creuset collaboration combines serious, quality cookware with the iconic heroes, villains, droids, and even starships from the beloved film franchise. Now it's easier than ever to serve up some delicious foods in your own cantina right at home.

This collaboration, available starting November 1, offers a wide range of cookware and accessories, including some serious collector pieces in addition to more affordable, perfectly giftable goods as well. Major characters from the Star Wars universe, such as Darth Vader, are re-imagined as a Dutch Oven or roaster pan. (Seriously, the execution is pretty great for all of these pieces). And even newer additions to the universe, such as the adorable Porg, can now help out with your baking as well.

Best of all, this is serious cookware that could basically withstand the heat of the sun (or even two suns, if you're cooking on Tattooine). Since its start in 1925, Le Creuset has become a favorite among home chefs for its durable, and often beautiful, enameled cast iron cookware. Now with the addition of Han Solo, the Death Star, and droid motifs, this cookware is probably among the coolest pieces in the universe.

First, the Han Solo Carbonite Signature Roaster ($450) recreates the iconic scene from The Empire Strikes Back. Although the movie scene is emotional and intense, this version of frozen Han is kind of hysterical. However, this is a pretty serious piece of cookware, and it's the first Le Creuset roaster (ever) that features a lid.

A perfect gift for any Star Wars fan, the Millennium Falcon & Death Star trivets ($20 each), are made from heat-resistant silicone to protect your tabletops from the hottest of dishes. Plus, just admire the level of detail on both pieces, including the cone on the Death Star that holds the superlaser.

The crown jewel of this collection, the special-edition Tatooine Round Dutch Oven ($900) is geared toward the super-collectors. Its pink-blue hues and twin suns are inspired by the sunsets on Tatooine, the desert planet that both Luke and Anakin Skywalker called home. There are only four of these available for sale in the U.S., and nine of them worldwide. Interested buyers must sign up in advance to buy this Le Creuset Tattooine Round Dutch Oven.

Next, it's a droid party with this set of little cookers. The BB-8, C-3PO, and R2-D2 Mini Cocottes ($30 each) are equal parts adorable and useful. Tiny pies, cakes, tarts, and about a billion other recipes can be whipped up in these handy little cooking essentials.

A more imposing piece of cookware, the Darth Vader Round Dutch Oven ($395) is made for roasting, braising, and general villainy. With its glossy black exterior, this piece is not just for show, because it can take the heat in both a stovetop or oven. For an added bonus for those who are deep into Star Wars fandom, the lid's interior features the word "France" cast into the iron, and translated into Aurebesh, the Star Wars galaxy's most well-known written language. Seriously, the attention to detail in this entire collection is kind of mind-blowing.

Lastly, the cutest piece in the whole collection, the Porg Pie Bird ($25) helps ventilate your pies with its distinctive (and precious) expression. Honestly, this little guy is reason enough to learn more about pie-baking, just to have an excuse to use it. Basically, even the most serious home chefs, as well as anyone who's a fan of the Star Wars universe and its many collectible characters, will appreciate these Star Wars X Le Creuset pieces.