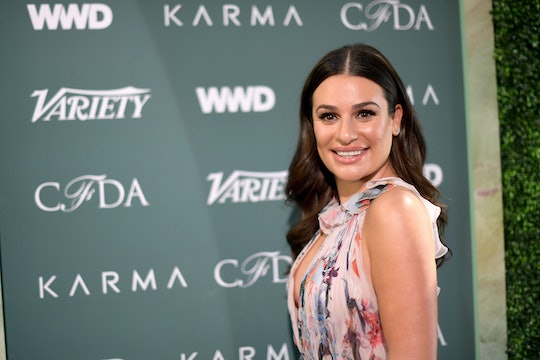 Lea Michele Isn't Having Kids Anytime Soon For *This* Reason

The decision to start a family is a big one that every person faces at some point in their lives. Being a mother is a huge responsibility — and is one that requires putting life on hold for a little bit to tend to the life of another. It's clear that actress Lea Michele and her new fiancé, Zandy Reich, have thought this through, especially given her thoughts on the subject of starting a family. In a new interview with Us Weekly, Michele revealed she isn't having kids anytime soon with her fiancé, and her thought process behind this is something that a lot of women can relate to.

Of course, after Michele got engaged to Reich in late April, according to People, some fans were starting to wonder about Michele's next stage in life. This stage, of course, involves getting married, becoming a wife, and eventually settling down with her husband. But based on her most recent interview with Us Weekly on Tuesday, it is clear that her career is coming first before she thinks about having kids — and that is totally OK.

While she might be open to having a family, according to Us Weekly, there is one thing that is stopping her from doing that and that is her career. "I'm still playing roles that are under 21, so I kind of want to push that for as long as I can," Michele told Us Weekly. "Having a baby might mess that up for me."

She does have a point. In Michele's most popular television roles, according to the Internet Movie Database, Michele played Rachel Berry, an over achieving high school student with a major talent on the show, Glee. She later followed up that role by playing the conniving college student, Hester Ulrich, on the show, Scream Queens, according to IMDB. It's easy to see why she might fear that becoming a mom would skew people's perception of her, especially when they've been so used to seeing her play her these young TV characters for so long.

But that isn't to say that Michele doesn't want to be a mom eventually. Michele told Us Weekly on Tuesday that she "100 percent" plans on having at least one kid and that starting a family is definitely in the cards for the couple somewhere down the line. "I come from a very large Italian family, so that's very important to me," Michele told Us Weekly.

Michele certainly isn't the first person to put her career first before making the decision to have kids or settle down and start a family. By doing so, she is joining the ranks of the majority of modern women who are putting off having kids, according to the Pew Research Center. A Pew Research Report from January, according to The Cut, found that women in the United States are having kids later in life and delaying motherhood altogether for quite a while. At 31-years-old, according to Us Weekly, Michele isn't alone in wanting to wait a little bit longer to have kids. In 2017, according to U.S. World News & Report, data from the Pew Research Center found that first time mothers were "more likely to be 35 or older than their counterparts from two decades ago."

There are a lot of factors that go into the decision to delay motherhood, according to Business Insider, including the decision to enter the workforce and establish a career, first, or accomplish specific goals before taking the time out of their lives to start a family. Michele's reasoning for not wanting to have kids immediately after she gets married falls right in line with this.

While Michele might be a pretty established actress and musician, it is clear she is very happy where she is in her career and she has so much more that she wants to accomplish. Although fans might be looking forward to Michele starting a family with her fiancé, rest assured from Michele's lips herself that she will eventually be starting a family — just let her focus on getting married, first.