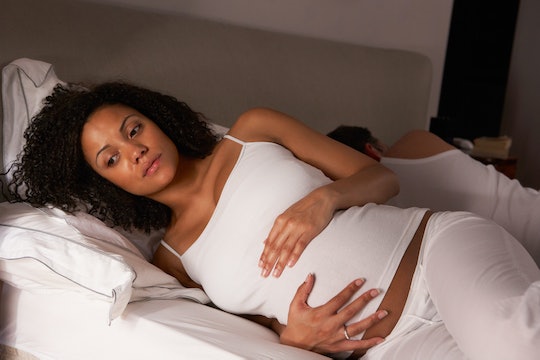 Some three years after the series of events that led to the poisoning of drinking water in Flint, Michigan, researchers are still uncovering the long-term negative effects that lead contamination could mean for residents. The established — and alarming — list of physical and developmental effects of toxic lead exposure in children has been a focal point in determining just how far-reaching the consequences might be. But just this week, a new study was released showing that lead poisoning harmed pregnant women in Flint in several (horrible) ways. According to the study findings, the water contamination crisis has led to a significant dip in healthy pregnancies for residents since April 2014 — and that could have generational consequences for the small community.

For the study, University of Kansas economics professors David Slusky and Daniel Grossman examined birth and death records for Flint and other Michigan cities since April 2014 and several years prior. The timing of the before-and-after snapshot of residents’ fertility is crucial: In April 2014, the city switched water sources from Detroit to the Flint River, according to a Michigan Live report. Slusky and Grossman found that the city’s fertility rates dropped by 12 percent after residents began consuming the lead-contaminated water. In addition, the rates of miscarriage and stillbirth went up by 58 percent over the same period.

In addition, the study seemed to eliminate other changes in resident behavior as a possible mitigating factor. Analyzing responses to the American Time Use Survey, the team found that the dip in residents’ fertility had nothing to do with adults having less sex after the water crisis, the researchers wrote in an official announcement posted on the school’s website.

We find no evidence of avoidance behavior. Either Flint residents were unable to conceive children, or women were having more miscarriages during this time. This represents a couple hundred fewer children born that otherwise would have been.

According to the Centers for Disease Control, exposure to lead in pregnancy can damage the fetus’s nervous system and lead to physical and behavioral issues during childhood. In addition, lead poisoning has been found to cause miscarriage and stillbirth, as well as infertility in men and women, according to the CDC website. But the study authors wrote that despite those known connections, the effects that lead in water could have on fertility and birth outcomes weren’t well established prior to the study. Slusky and Grossman told Michigan Live that traditional use of lead offered one chilling hint to what their research might find: In the early 1900s, American pharmacists would prescribe lead pills to women who wanted to have abortions.

Slusky’s and Grossman’s analysis will be released in a working paper distributed as part of the Kansas University Economics Department’s Working Papers Series in Theoretical and Applied Economics. Slusky told USA Today that the paper has not yet been peer reviewed by other scientists (which is a pretty big deal).

Still, the dramatic findings in this latest report are at odds with what state health officials have said about the potential effects the Flint crisis could have on birth outcomes, Michigan Live reported. In July 2015, the Michigan Department of Health and Human Services issued a report stating, in part, that there was no evidence that the switch in Flint’s water supply would cause higher fetal death rates and other negative birth outcomes. And even though 18,000 corroded water pipes have yet to be replaced, according to an NPR report, officials have cleared Flint residents to use filtered water.

USA Today reported that so far 15 state and local officials have been criminally indicted as a result of their alleged roles in the Flint water crisis.