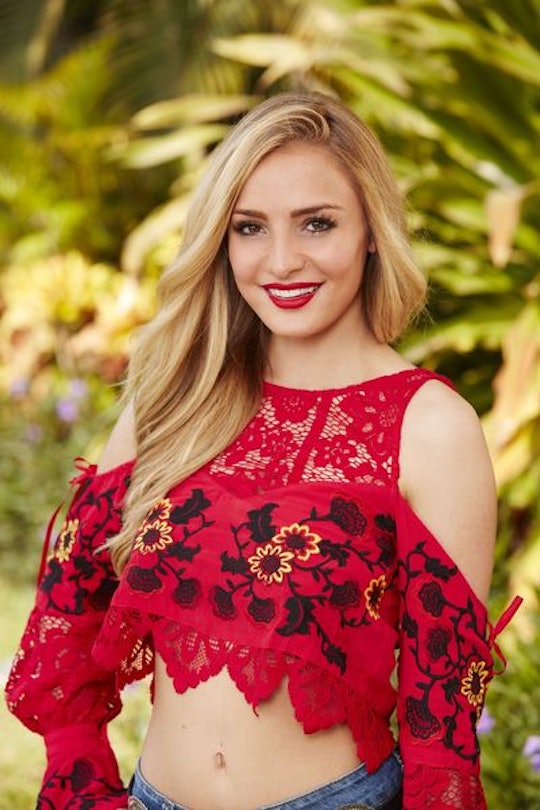 There are a lot of things you can criticize Leah Block over. For one, her portrayal on The Bachelor was anything but positive, as fans everywhere saw her take a quick turn towards Drama (with a capital D) by throwing Lauren Bushnell under the bus (for now reason, as far as we, at home, concerned). There was also the very misleading black eye that was never explained during Ben's season of The Bachelor. But, one thing to not criticize Leah Block about is her appearance. Leah Block's face on Bachelor in Paradise is not for the taking, and if anyone needs to hear this creed, it's Emily and Haley Ferguson, the twins on the show.

On Monday night, Leah was welcomed to Paradise by Chris Harrison with open arms. Well, for the most part. Unfortunately, the warm welcome abruptly ended when she actually joined the other cast members. Almost immediately, the "in-the-moment" interviews showed very different points of view from different cast members. Leah seemed excited to be with her "friends", while basically every other person (who knew her) made comments about how they either don't like her, or aren't friends with her.

Then, the twins, took it a step too far. They started commenting on how different she looks. But, it's one thing to say that someone looks different. It's even OK to note how it looks like they got work done. Obviously, every person is different and will take to the conversation about what cosmetically they did and didn't change, but when you begin to make fun of someone for Botox and lip injections, then you're just going too far.

In their very own in-the-moment, Emily and Haley were jokingly asking for more more Botox and lip injections to off-camera producers. It was not only petty, but it was immature and stooping to a level that just didn't need to be visited.

If we're going to critique anything about Leah, we can look at her personality on the show. Almost immediately after her date with Nick, Leah started acting jealous and so not cool towards Amanda, who was asked on a date by Nick (two dates in one day!). Whether it was just awkward tension or pettiness, these are the things we should be skeptical of. Not her face — because it is her face, she can do or not do whatever she wants with it. (Then again, if that means put a fake black eye on for drama, then we have issues.)