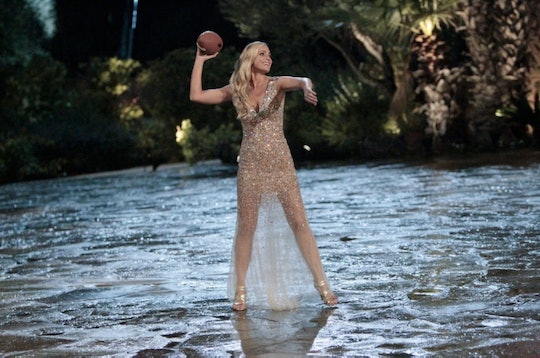 Leah Defends Herself On 'The Bachelor: Women Tell All' But The Other Women Weren't Having It

The day we have all been waiting for has finally arrived, Bachelor Nation! The highly anticipated "Women Tell All" episode of The Bachelor aired this week, and I hope that you prepared yourself in advance for the whirlwind of drama that hit our television screens. There was a ton of girl-on-girl crime on Monday night's special, but one of the most standout moments was definitely when Leah explained her actions on The Bachelor: Women Tell All, and let's just say that it did not exactly go over well with the rest of the women.

Things got heated very quickly when the cameras turned to Leah, with Chris Harrison blatantly coming out and asking "What happened with you?," practically begging for an explanation for her previous altercation with Lauren B. To refresh your memory, Leah slammed Lauren B. to Ben Higgins on an earlier episode of The Bachelor, saying that she behaved differently with Ben than when she was around the other women, and basically totally throwing her under the bus.

In response to Harrison's question, Leah explained that she was devastated when she didn't get the one-on-one date with Ben that week, which perhaps fueled her actions that followed. "It was brought up that Lauren B. made a comment that the girls were losers for being upset," she went on to say. So this warrants totally sabotaging another woman's relationship with Ben? I don't think so.

Leah proceeds to explain that she didn't think her private conversation with Ben should have been publicly discussed with the women. This clearly sparked a reaction with the rest of the women, because both Jami and Becca chimed in, claiming Leah straight up lied to their faces. Awkward.

Leah's defense for her actions were rather underwhelming, if you ask me. She sort of brushed the other women's comments under the rug and avoided the subject as much as we could. But hey, at least we got some sort of explanation, right?