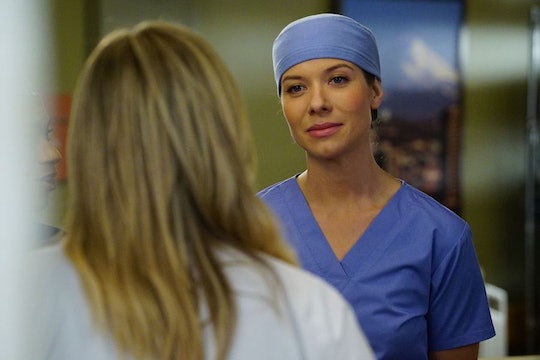 Leah Murphy Returns To 'Grey's Anatomy' & It's An Awkward Reunion

On Grey's Anatomy, characters come and go and on Thursday night Leah Murphy was no exception. We haven't seen her since she was fired back in Season 10 and to be honest she wasn't all that missed. Still, now that Leah Murphy has returned to Grey's Anatomy, things are beginning to get a bit awkward. First, there's the fact that Murphy slept with both Arizona and Alex. Then things got really awkward after Murphy developed real feelings for Arizona, but Arizona only saw her as a casual fling and didn't want a serious relationship with Leah. Devastated and feeling used, Leah filed a sexual harassment charge that caused a lot of upheaval in the hospital because everyone at Grey Sloan is hooking up with someone at Grey Sloan.

Needless to say, there weren't a lot of people happy to see Murphy back. Of course Arizona was super uncomfortable about her ex's return and even asked Dr. Weber why he would allow her to come back. Then Stephanie and Jo started telling DeLuca all about Murphy and why she was fired in the first place. Stephanie went on and on about the fact that Murphy slept with two attendings and that she wasn't a great surgeon to begin with. Naturally, Murphy overheard their conversation, which made the situation 10 times more awkward.

However, despite the awkward tension that surrounded Murphy's return, she was able to find comfort in the operating room, working side by side with Riggs and Maggie. Murphy admitted to Maggie why she got fired, but also explained how hard she worked to become a better surgeon. She then confessed that it was Maggie that led her back to Grey Sloan because Murphy now knows that she wants to be a cardiac surgeon just like her. She said she understood if Maggie had concerns about all the things people were saying about her. But Maggie quickly shot that down and explained how she thought about quitting after being in the hospital for only two weeks and Riggs joined in, admitting how he'd gotten punched in the face during his first week.

And thus the Grey Sloan Misfits Club was formed and Murphy realized even if her old friends didn't want her anymore, she may have found new ones. It's unclear if Murphy will actually stick around for good this time, but for now it seems she's found a new place for herself at Grey Sloan Memorial.