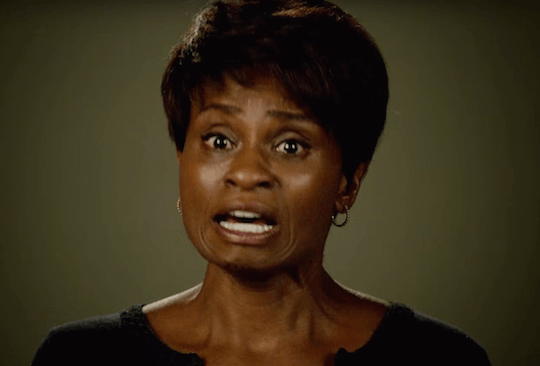 Lee Is The Survivor On 'AHS: Roanoke' & Twitter Has Thoughts

When AHS: Roanoke began, we had no idea what was actually happening. Then, after six episodes, we figured out that the My Roanoke Nightmare documentary was over and we had entered the real life world of reality TV. There, Cheyenne Jackson's character produced a nightmare of a show where dramatizing actors and real like participants ran around an old haunted Roanoke home. We were told only one of them would survive — but who would it be? Well you're either going to love or hate the reveal, which was finally shown on the penultimate episode of the season. Turns out, Lee is the survivor on AHS: Roanoke, which, like, are any of us surprised?

Lee was kind of a wild card all season. On My Roanoke Nightmare, it was hard to not empathize with her. She was fighting for her daughter (didn't work), she was battling a divorce (really didn't work), basically things that were not making her life any easier. Enter possessed town you really don't want to get involved with during a dramatic time in your life, and BOOM, we have Lee, the slightly dysfunctional (also murderer) mother of one, who always seemed to cause issues for those that were trying to lead a non-murdery life in Roanoke.

Lee was revealed to be the only surviving Three Days In Hell cast member to survive the ordeal when the cops finally showed up at the cursed house on Wednesday's penultimate episode. For a moment, it looked like Shelby (Sarah Paulson) was going to be the one to get out alive (and not arrested), but a few quick movements ended her life and landed her in a body bag.

So, that left us with Lee. Some people were not thrilled about that, others were just not surprised. Of course it was Lee. It had to be Lee.

The bigger surprise is that Lee will be sitting down with Lana Winters (Sarah Paulson, Season 2) for a tell-all interview in the finale. Should be interesting to see how these two interact and if Lee comes clean about murdering her husband. Either way, something tells me that Lee is just in for more of a wild ride.