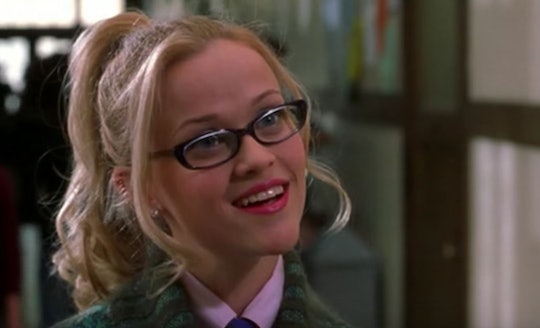 Practice Your Bend & Snap, Because 'Legally Blonde 3' Is Reportedly In The Works!

Reese Witherspoon's character, Elle Woods, in the 2001 film, Legally Blonde, inspired a generation of young women everywhere. It taught them that they could care about fashion and getting their nails done while still being able to be successful and achieve all their lofty goals. This is kind of figure still needed in the world, 17 years later, for an even younger generation. But the good news is, Legally Blonde 3 is reportedly in the works and it sounds like Ms. Elle Woods herself, Reese Witherspoon, could be on board for the project. Yes, please!

Witherspoon is reportedly "in talks" to play Woods (for a third time) in a new movie, produced by MGM and through Witherspoon's production company, Hello Sunshine, according to The Hollywood Reporter. But if this movie does go through, Witherspoon won't be the only one from the original film to return. The film's screenwriters, Kirsten Smith and Karen McCullah are also rumored to return to the film's third installment, as well as the original producer, Marc Platt, according to The Hollywood Reporter.

It sounds like it's time for fans to bust out their finest pink dresses, high heels, and find themselves a Chihuahua as cute as Bruiser Woods — because this report sounds as serious as Elle Woods in the court room.

While the film is still reportedly in talks, this new sequel's potential plot line sounds very exciting. The film will reportedly be "in the spirit of the first film," according to Deadline, with the intention of making the film "about female empowerment" and topical to today's serious issues. That sounds amazing.

But it's understandable if fans are apprehensive about this new film. The film's sequel, Legally Blonde 2: Red, White, and Blonde, which came out in 2003, didn't necessarily get the best reviews. One critic called the film a "cinematic abomination," according to Rotten Tomatoes. A Legally Blonde direct-to-DVD spin-off film, Legally Blondes, geared towards a younger audience, failed to generate as much success as the first two.

Let the past be in the past. Fans on Twitter seem super excited about the potential of a third Legally Blonde film.

In addition to her fans, it sounds like Witherspoon is on board with another film. During an interview with James Corden last year, according to Cosmopolitan, Witherspoon revealed that she hasn't ruled out playing Woods just yet. "I think it would be kind of cool to see her 15 years later," Witherspoon said.

And just like the film's fans, Legally Blonde still holds a special place in Witherspoon's heart. Witherspoon still continues to quote the movie on social media. Plus, in 2016, Witherspoon shared with fans on Snapchat that she still has 60 outfits that she kept from the first film, according to Elle, and even tried some on for her followers (spoiler alert: they still fit). I'm sure fans would love if they got to see Witherspoon wearing that iconic bunny costume from the first film (OMG) in this new reported sequel.

Although it has been quite a while since the first film came out, its legacy continues to hold strong to this day. During an interview with Entertainment Weekly in April, McCullah revealed that one fan wrote to her and told her that the film helped him cope with his depression and "saved his life." One woman even wrote a 15,000 word dissertation on Legally Blonde and its role in "creating strong female characters", according to TIME, and delivered her hard work to Witherspoon in person. "There's an entire generation of women who became lawyers because of this movie," McCullah told Entertainment Weekly. "And we never thought that we made law school look that interesting."

This world is big enough to support a new generation of strong, smart women, looking to change the world (or their lives) just like Woods aspired to do. Here's to hoping that a potential third Legally Blonde film will do the same.