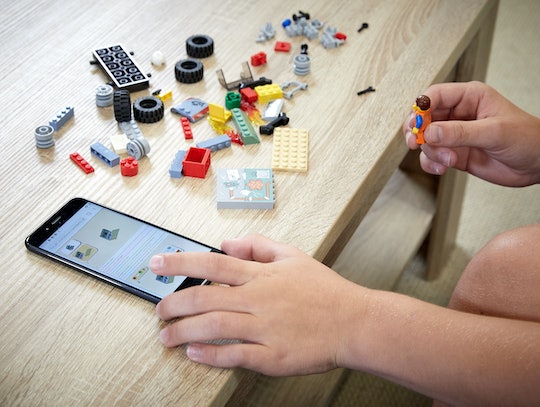 As much as parents love to complain about the unique pain that is stepping on a pile of Lego bricks while barefoot, most of us secretly love them. Lego products allow our kiddos to express their creativity through free play, while also giving them the chance to unleash their inner engineers. But up until now, this iconic toy hasn't been easily accessible to everyone, which is why Lego's new audio and Braille building instructions are so important. Not only do they give blind children the chance to have fun too, but it sends an important message about inclusivity.

On Wednesday, Aug. 28, Lego announced its upcoming Lego Audio & Braille Building Instructions, Mashable reported. The initiative uses AI technology, and was inspired by 22-year-old blind entrepreneur Matthew Shifrin, according to a news release. Because Lego instructions have always used visual images, Shifrin was unable to construct sets without assistance. So when he was 13, he and a family friend named, Lilya, created language-based instructions for kids just like him.

“This is extremely important for blind children because there aren’t a lot of places where we can say, ‘Look Mom and Dad! I built this on my own… I did this,’“ Shifrin explained in the news release. “For blind children, we don’t have access to what sighted kids are used to. Lego bricks enable us to learn about our environment, to see the world.”

Ultimately, Shifrin launched his own website that provides instructions for certain sets that he and Lilya had created, and it wasn't long before requests from parents and kids came pouring in for him to create more. That's when Shifrin brought his idea to expand audio and Braille instructions to the Lego Foundation. Together with Shifrin, Lego enlisted help from the Austrian Research Institute for Artificial Intelligence.

"I would like to get my instructions out to the blind community," Shifrin said in a news release. "I would like every blind person to be able to download the instructions, buy a set, have a sighted person sort the pieces, and feel on par with a sighted builder. I want every blind person to feel that the once impossible is now possible; that he or she can now build a miniature Lego world.”

If you're hoping to get started on some Lego sets ASAP, an initial pilot rollout for audio and Braille building instructions is now available. These instructions are available in all markets in English free of charge for these four play sets, according to TK:

The pilot phase will run from Aug. 28-Dec. 31. After this time period, the goal is to launch more audio and Braille instructions in 2020.

News of the upcoming audio and braille building instructions comes just a few months after Lego announced it will soon roll out Braille bricks. Each Braille block has studs with the six-dot setup of the individual letters and numbers from the Braille alphabet — but they'll also be compatible with classic Lego bricks, according to NPR. Braille Bricks will be available at commercial stores in 2020. Considering only 10 percent of blind children are learning Braille, according to a study from the National Federation of the Blind, this could do wonders for Braille literacy.

Personally, I think both the Braille bricks and the audio and Braille instructions from Lego are fantastic. And I'm sure adults and children who have low vision or are blind will love getting in on the Lego building action. Kudos to Lego for its continued efforts toward inclusivity.