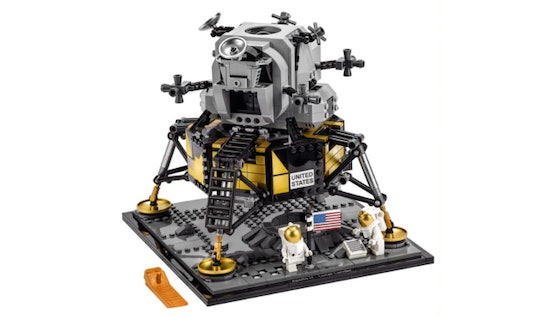 If You Love All Things Space, Prepare To Obsess Over LEGO's New Apollo 11 Kit

There are few things that capture the imagination more than the idea of traveling to space. 50 years ago, three intrepid Americans donned their suits, settled into Apollo 11, and blasted off to the moon. In honor of the anniversary, LEGO is launching an Apollo 11 kit which will hopefully inspire our next batch of space explorers.

LEGO is known for their innovative and exciting building kits. Whether it's all things Harry Potter, a cute Disney Pixar set, or even a kit for Netflix's Stranger Things. These intricate kits frequently sell out, and end up being sold on eBay for hundreds of dollars. When it was announced that Lego is launching an Apollo 11 kit, my first thought was "this is going to sell out fast."

As with all LEGO kits, the detailing is out of control. From the legs and feet of the lunar landing module, to the gold sunscreen shields over the astronauts' faces, this addition really is quite an accurate representation of the original shuttle.

LEGO has always been committed to making children more aware of history as well as guiding young, developing minds to think in new, constructive ways that bridge the gap between ordinary play and learning. In a press statement, Michael McNally, senior director of brand relations at LEGO Systems, Inc, said, "We have a deep understanding of the ways in which play can have lifelong impact, and we have been champions of the awe and wonder of space exploration through playful building for almost as long as the world's celebration of the first moon landing,"

He continued, saying, "There are countless stories of engineers, scientists, astronauts, and roboticists who point to their experiences with LEGO building as the reason they are engaged in their current careers. We hope that our ongoing commitment to space-themed play materials will inspire future generations to help us continue exploring."

And who doesn't want to be an astronaut? I know I did as a child, which makes this all the cooler for it. It's pure fantasy based in reality. And it's not the only new space-themed item from the beloved brand. The people at LEGO already issued the rocket that launched this lunar module, the Saturn V, which includes all three astronauts that were on the original mission. The company also announced in the aforementioned press statement that they will be releasing seven new LEGO City Mars exploration sets in the future. It's an out-of-this-world lineup of LEGO kits that you and your kids can look forward to.

For me, building LEGO kits with my kids helps center me. The repetitive process of stacking block after block is almost like a meditation. It is relaxing for me, for as long as I do it. However, I will admit I am not a fan of stepping on a LEGO brick, barefoot, in the middle of the night, when I can't scream.