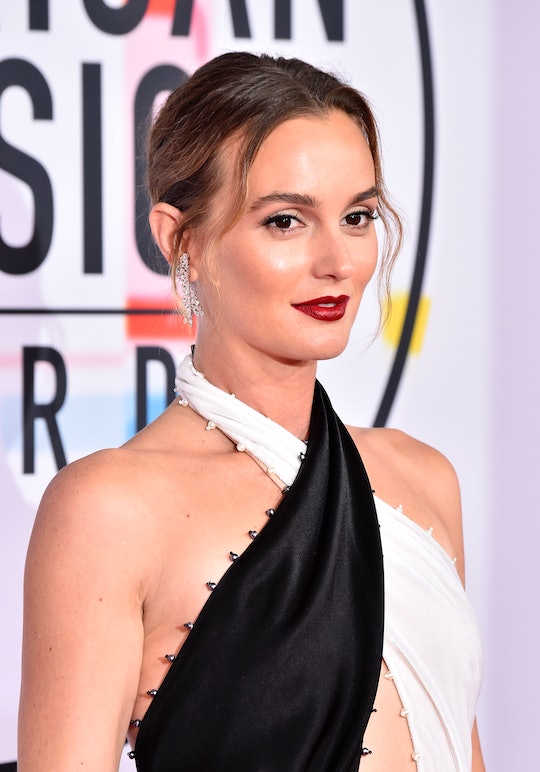 Whether it's on a red carpet or during a talk show, people seem to be obsessed with asking successful women — who also happen to be mothers — the same question: How do you strike a work-life balance? Meanwhile, male celebrities or successful businessmen who are fathers are rarely asked the same type of question. (Ugh, right?) Not only are these questions annoyingly sexist — they're downright laughable. I mean, does anyone have an ideal balance between work and family 100-percent of the time? As it turns out, Leighton Meester is so over the allusion of work-life balance — and can I get an, "Amen"?

If you haven't kept up with her through the years, she has a 3-year-old daughter named Arlo with her husband, Adam Brody, according to SheKnows. And recently, the Gossip Girl alum recently sat down with Shape magazine to chat about her exercise and nutrition routines. Meester — who currently stars as Angie in the ABC sitcom Single Parents — also touched on the topic motherhood. "I feel that I am really lucky, and yet, still, I stepped into the hardest job in the world: being a mom," she told the publication. (Aww.) But don't ask her about work-life balance. Because it's all a load of BS to her.

"I just don't believe in balance. I think that's not possible if you're a working mother — and with single mothers, I can not even imagine that," she told Shape. "I love playing Angie because we discuss how hard the struggle is to feel like you are enough." She continued:

Some days my husband makes dinner, and some days I do. Other days, I'm too tired, and I eat a bowl of cereal for dinner. It's just the thing we do to make it work.

Considering how private Meester typically is about her personal life — and motherhood in particular — her interview with Shape is pretty noteworthy. In March 2017, the actress shed a little light on why this might be so. "I don’t talk about Arlo very much," the actress told Refinery29. "I am very proud of that area of my life. But I’m also really proud of the show, and of the work I do. I think the perception is: You’re an ingenue, or you’re an icon, or you’re a mom. There’s no in between." Makes sense to me. Who wants to limit themselves and risk being typecast? Definitely not her.

In August, Meester did share a pretty relatable snippet of her parenting experience: The fact that little kids love watching the same movie over and over again. "She's really into Edward Scissorhands," she told ET of Arlo. "It's actually not, like, really violent or anything. It's, like, very sweet and nice." Meester went on to explain:

We were like, 'I don't want to watch these cartoons anymore. I need to watch, like, a better movie.' Because they watch stuff on repeat. So it's cute.

Hmm. "Cute" isn't the first word word that comes to mind. But I can totally relate. (That's exactly why my kids had a The Greatest Showman phase.) Leighton Meester might not be the most open celebrity mom, but what little insight she had given to fans about motherhood is spot-on.