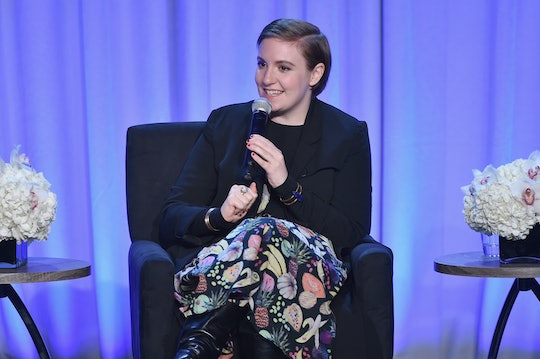 In a post on her Facebook page Monday, Lena Dunham said her endometriosis will keep her from doing press for season five of Girls, according to Entertainment Weekly. A surprisingly common chronic condition affecting approximately 1 in 10 women, endometriosis occurs when "the type of tissue that forms the lining of the uterus is found outside the uterus,” according to the American College of Obstetricians and Gynecologists. Symptoms can include pelvic pain, heavy periods, and can lead to infertility.

Dunham has discussed her experience with endometriosis in the past — most recently in an essay for Lenny Letter, a newsletter she created with Girls showrunner Jenni Konner. But, by announcing her decision to step away from work, she has not only added to the conversation about awareness, but started a new one entirely — one that says it’s OK to take debilitating chronic health conditions seriously, and to put our own well-being first. While Dunham acknowledged that she is in a privileged position, noting that “[so] many women with this disease literally don't have the option of time off and I won't take it for granted,” by being up-front about her decision, she is letting millions of other women who suffer from chronic illness know that sometimes, not only do you not have the option to keep pushing through, but that you shouldn’t even try.

In her essay, titled “The Sickest Girl,” Dunham described how her illness went undiagnosed for years, as is the case for far too many women. When she finally received the diagnosis — stage two endometriosis — Dunham wrote that she “no longer felt like a weakling [but] like a survivor.” But the feeling was temporary: after six months of being pain-free, her endometriosis flared up again.

The significance of Dunham’s experience is that it is not just a story about her, but one that reflects the reality that so many other women face: living with pain, being misdiagnosed, and worrying about the implications of having a chronic disease when you are also trying to hold down a job, perhaps raise a family, and also, in general, just trying to have a life. And since endometriosis is exclusively a “woman’s disease,” as well as one that has a huge impact on sufferers’ mental health, there are a lot of unspoken assumptions: that not being able to properly function means you’re weak, or crazy, or maybe both. As Dunham wrote in her Lenny Letter essay:

Endometriosis is not life-threatening...I know I'm lucky in the grand health scheme. I also know that I am one of many women who grasp for a sense of consistent well-being, fight against the betrayals of their bodies, and who are often met with skepticism by doctors trained to view painful periods as the lot of women who should learn to grin and bear it.

Although news of Dunham’s suffering is not at all welcome news (and while Girls fans will surely be disappointed that she won’t be making press rounds ahead of the new season), by speaking openly about it, and by prioritizing her own health, she has shown through her own example that not only do women have the right to take their own pain seriously, but that there is no shame in doing so.