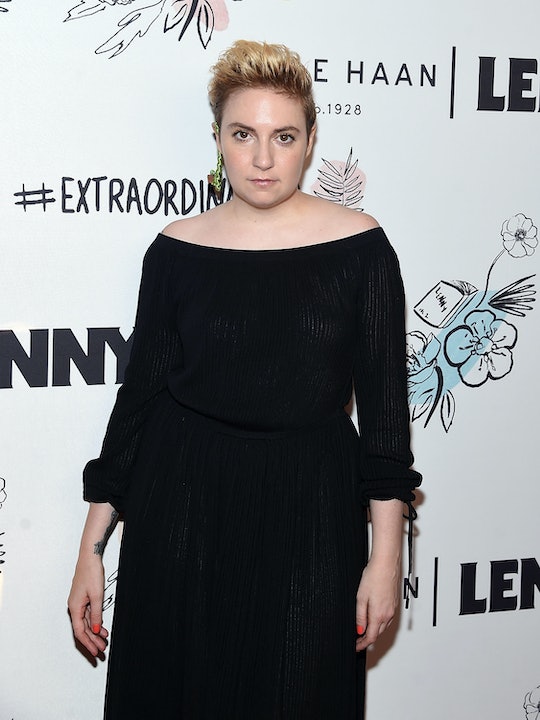 Lena Dunham has always been open about suffering from endometriosis, and last year, she got an elective hysterectomy to help relieve herself of her chronic pain. In a new interview with The Cut, Lena Dunham got honest about no longer being able to have children naturally due to her hysterectomy, how she came to that decision, and how she feels about so many of her friends getting pregnant and having babies.

In November 2017, after months of pain management feeling like her "second job," as she wrote for Vogue this past February, Dunham chose to get a total hysterectomy at age 31. A total hysterectomy is the removal of the uterus and the cervix, which "ends menstruation and the ability to become pregnant," according to the Cleveland Clinic. In her new interview with The Cut, Dunham explained that she chose not to get her eggs frozen before the elective surgery, ending her chances of having a biological child.

“I was in too much pain to wait,” she told The Cut, speaking about postponing the surgery to get her eggs frozen. “It’s really amazing, in points of extreme distress, how things you thought were nonnegotiable start to become negotiable ... I thought I would do anything to have a kid naturally. Turned out that wasn’t true.”

Getting pregnant and having a baby was something Dunham dreamed about since she was a child. In her essay for Vogue earlier this year, she explained:

As a child, I would stuff my shirt with a pile of hot laundry and march around the living room beaming. Later, wearing a prosthetic belly for my television show, I stroke it subconsciously with such natural ease that my best friend has to tell me I am creeping her out.

Dunham's desire to have a baby shows just how bad her endometriosis pain must have been, since she chose to have her uterus and cervix removed before freezing her eggs. She knows it was the right choice for her — and that was amplified when her surgeon told her that her uterus was the most "misshapen and diseased" uterus they'd seen in their entire career (a moment of "vindication" for Dunham), as she told The Cut. That being said, Dunham has been struggling with the wave of her friends who have been moving onto the motherhood stage of life while she has been accepting the reality that she will never become pregnant.

“It’s always like a little catch in the throat when I think about it. It’s all those things like new-baby smell, and breastfeeding, and looking at a baby that you know looks like you,” Dunham told The Cut. “When I just figured out you could mute Instagram stories, it was such a f*cking blessing.”

In the time she's had to reflect on her hysterectomy, Dunham has grown excited about other ways she might become a mother one day — she wrote for Vogue that she plans to pursue adoption. Additionally, she has used her art to make fun of and heal from her pain. In an interview with IndieWire last month, Dunham opened up about the lines she wrote for HBO's Camping about chronic pain. "Oh, I was making fun of it," she told the website. "Because there’s a part of you where you get so caught up in your own bullsh*t, that you just can’t even see outside of it."

Dunham has been through a lot in the last year, and it's nice to hear about the ways she is moving forward after going through so many life changes.