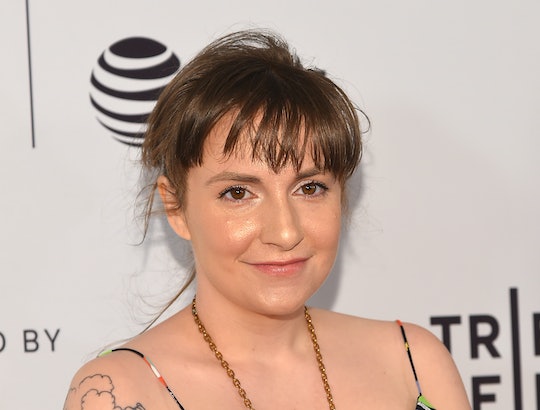 Lena Dunham has been dealing with endometriosis for years and has long been open about her struggles with the painful, often debilitating condition. And now, the Girls writer and creator has made a brave decision to stop her suffering. In the March 2018 issue of Vogue, Dunham revealed that she had a full hysterectomy, which is the surgical removal of a woman’s cervix and uterus, in order to end her painful battle with endometriosis, as People reported.

After years of battling the disorder and undergoing several surgeries, according to People, Dunham wrote in an essay for the upcoming issue of Vogue, "In addition to endometrial disease, an odd hump-like protrusion and a septum running down the middle, I have retrograde bleeding, a.k.a. my period running in reverse so that my stomach is full of blood."

The 31-year-old actress continued, "My ovary has settled in on the muscles around the sacral nerves in my back that allow us to walk. Let’s please not even talk about my uterine lining. The only beautiful detail is that the organ — which is meant to be shaped like a light bulb — was shaped like a heart."

Dunham previously had gone through five surgeries prior to deciding to get a hysterectomy, according to the Daily Mail.

Endometriosis is a disorder where tissue that lines the uterus ends up growing outside of the uterus. This can, at times, cause chronic pain, which is definitely something Dunham dealt with, along with a laundry list of other issues. According to Women's Health, more than 11 percent of women between the ages of 15 and 44 are affected by endometriosis. Some symptoms can include chronic pain, infertility, bleeding and digestive problems, according to the Mayo Clinic, and some sufferers may opt for different surgical procedures to ease their symptoms. Dunham bravely made the decision to go for a more permanent surgery.

While endometriosis can cause infertility, ridding one's body of its uterus completely takes away the possibility of biologically having children, so Dunham has weighed her options, according to People. Dunham, who has remaining eggs, explained in Vogue that she plans to explore her options for having children, from surrogacy to adoption.

According to the Endometriosis Foundation of America, Dunham tried many alternative treatments prior to choosing to go with the elective hysterectomy surgery. Dunham reportedly tried “pelvic floor therapy, massage therapy, pain therapy, color therapy, acupuncture and yoga.” Dr. Oz reported that various treatments for endometriosis can also include naturopathy, osteopathy, and chiropractic treatments.

Dunham isn't the first celebrity to open up publicly about their struggles with endometriosis. According to TODAY, Dancing With the Stars' Julianne Hough was diagnosed with endometriosis in 2008 and Top Chef's Padma Lakshmi has also discussed her struggles with the disease. Years ago, Hough was reportedly performing on Dancing With the Stars when she started experiencing severe pain. Her mother was in the audience and rushed her to the hospital. She had not yet been diagnosed with the disorder, according to TODAY, and Hough continues to deal with painful "episodes" to this day.

Clearly, Lena Dunham is not alone in her disorder and there are so many women dealing with the same painful disease. Making this decision is truly a difficult one to make, especially for a woman who is just 31 years old and has not yet had children. Last month, People reported that Dunham and her boyfriend of five years, Jack Antonoff, had amicably split. Having gone through the emotional and physical journey of getting a hysterectomy and then dealing with the breakup of a longtime relationship, Dunham's strength is inspiring.