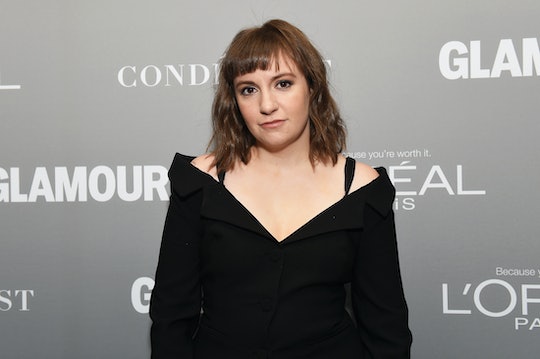 Lena Dunham Says She Wishes She’d Had An Abortion, & Here's Why That's An Issue

On her Women of the Hour podcast recently, actress Lena Dunham said she wished she'd had an abortion in order to help fight stigma around the issue, causing an instant backlash from many people, both liberal and conservative. During her podcast, she spoke about visiting a Planned Parenthood in Texas several years back and telling a young girl that, despite her support for women's rights, she herself had never had an abortion. Now, she wishes she had had an abortion in order to combat stigma — a reason that many women are calling her out for. (Romper reached out to Dunham's representatives regarding the response to her statement, but did not hear back at the time of publication.)

To be clear, Dunham's intentions seem to be in the right place, and she's been a vocal supporter of women's rights for years now. But saying that she wishes she'd had an abortion in order to better advocate for reproductive rights trivializes the struggles many women have to go through in order to have an abortion in the United States.

My latest podcast episode was meant to tell a multifaceted story about reproductive choice in America, to explain the many reasons women do or don't choose to have children and what bodily autonomy really means. I'm so proud of the medley of voices in the episode. I truly hope a distasteful joke on my part won't diminish the amazing work of all the women who participated. My words were spoken from a sort of "delusional girl" persona I often inhabit, a girl who careens between wisdom and ignorance (that's what my TV show is too) and it didn't translate. That's my fault. I would never, ever intentionally trivialize the emotional and physical challenges of terminating a pregnancy. My only goal is to increase awareness and decrease stigma. I take reproductive choice in America more seriously than I take literally anything else, and therefore own full responsibility for any words I speak that don't convey this truth clearly. I know plenty of people will never like a thing that leaves my lips, mea culpas or no, but this apology is for the women who have placed their trust in me. You mean everything to me. My life is and always will be devoted to reproductive justice and freedom. You know how in some households you curse and have to put money in a jar? Well in mine, if you mess up your pro-choice messaging you have to give a sizable donation to abortion funds (https://abortionfunds.org/need-abortion) in New York, Texas and Ohio 💰I look forward to fighting with you all for the next four years and beyond.

The thing is, most women are not getting abortions simply to have a better platform for their advocacy work, and even if Dunham had had an abortion, her experience likely wouldn't reflect that of most women, due to her fairly privileged background and social status. For many women in the country, however, an abortion could cost them their jobs (if they cannot secure time off work), their relationships (in areas where abortion is highly stigmatized), or more money than they can afford. In states where abortions are virtually unattainable due to strict regulations or lack of facilities, some women face the decision to either pursue an illegal, unsafe abortion or to have their lives altered significantly by a child they either cannot have or do not want.

Thanks to her fame, Dunham has an excellent platform to advocate for women's reproductive rights — but she doesn't need to have had one herself in order to do so. In fact, it'd be more effective if she used her platform to share other women's stories of abortion: the world needs to hear the stories of poor women who live in states with strict and dehumanizing abortion laws, who face political, cultural, and classist barriers when trying to end a pregnancy.

As a white, upper-class female who lives in a liberal state and is surrounded by liberal friends, Dunham would have an entirely different experience when seeking an abortion than a lower-income woman of color in Texas would, for example. The world doesn't simply need reassurances that there's no stigma against abortion; the world needs to hear the heartbreaking stories of women who, by law, are forced to endure descriptions of their fetuses before having an abortion, and those who must go through three separate consultations before being allowed to undergo a routine procedure. They need to hear the stories of women who pay thousands of dollars for an abortion, who are forced to wait through mandatory waiting periods, and who endure anti-abortion protestors' shouts outside of abortion-providing clinics.

For many women in the United States, an abortion is not a matter of improving their advocacy platforms or combating stigma — it's a costly, taxing procedure with many repercussions, one that they choose to pursue because it's still their best option in a bad situation. In order to advocate for reproductive rights, their stories are the ones the public should be hearing and sharing.