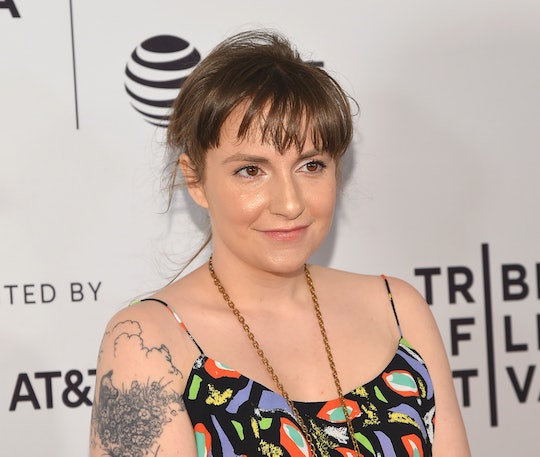 Within media, more and more celebrities have opened up about their struggles with reproductive health. For some, that looked like opening up about infertility issues, but for other celebs it looked like openly discussing their experiences with chronic pain. In a recent Instagram post, Lena Dunham shared a candid photo after surgery to remove an ovary, and it's an expression of raw honesty that people don't often see.

Endometriosis is a disorder where the tissue normally lining the inside of your uterus grows outside of it instead, as defined by Mayo Clinic. This tissue acts as it normally would. But it doesn't have any way to leave your body and so it gets stuck.

It's an often painful disorder and far more common than people expect. Approximately 1 out of 10 women in the United States have endometriosis, according to the Endometriosis Foundation of America, but many more may also be undiagnosed.

Chronic pain can be really difficult to discuss, but more celebs are opening up about their experiences and that's important. Lena Dunham's Instagram post is a candid snapshot at some of the realities of having a chronic illness.

On Oct. 17, Dunham uploaded a photo of herself lying in a hospital bed. In her caption, Dunahm discussed everything from her procedure to misconceptions surrounding her disease and how thankful she is for her access to healthcare.

In one part of her caption, Dunham wrote:

"A big lesson I’ve learned in all this is that health, like most things, isn’t linear- things improve and things falter and you start living off only cranberry juice from a sippy cup/sleeping on a glorified heating pad but you’re also happier than you’ve been in years. I feel blessed creatively and tickled by my new and improved bellybutton and so so so lucky to have health insurance as well as money for care that is off my plan.

She then went on to add:

"But I’m simultaneously shocked by what my body is and isn’t doing for me and red with rage that access to medical care is a privilege and not a right in this country and that women have to work extra hard just to prove what we already know about our own bodies and beg for what we need to be well. It’s humiliating."

"Heal up! Feel better & can not wait for the next chapter!" one user commented.

"I hope you feel better soon Lena and thank you for talking about this. My only wish is that every single woman fighting this condition and living with this unbearable pain, had access to proper medical care. I’m constantly thinking about the women who cannot afford to get this treated. I am one of them," one user wrote.

"I have the same scars still #twins#whatdoesntkillus#makesusstronger," another said.

Last year, Dunham had a hysterectomy in efforts to battle the effects of endometriosis. In an article she wrote about the experience for Vogue, Dunham highlighted her previous attempts to manage the pain, writing, "I try so hard it becomes a second job. I go to pelvic-floor therapy, massage therapy, pain therapy, color therapy, acupuncture, yoga, and a brief yet horrifying foray into vaginal massage from a stranger. I am determined to outmaneuver whatever is eating me from the inside."

Hopefully, celebrities and other women opening up about their experiences with chronic conditions like endometriosis will make it easier for other women to receive proper diagnosis and the treatment that they need.

For now, though, it seems that plenty of Dunham's fans are wishing her a safe and speedy recovery!