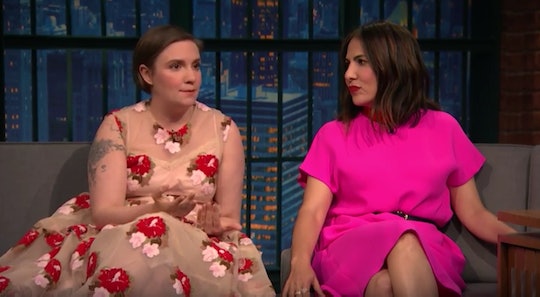 In a recent appearance on Late Night With Seth Meyers, Girls co-creators Lena Dunham and Jenni Konner revealed that, despite becoming two of the most prominent voices in modern feminism, it was when their favorite Kardashian gave a shout out to their project Lenny Letter that they were pretty much floored. Not only are the two women fans of the Kardashian crew — Dunham admitted to Meyers that she Instagrams about Khloe Kardashian at least a couple of times a day — they consider the tight-knit sisters to be role models, which probably came as a surprise to most fans. Lena Dunham thinks the Kardashians are real role models — a not-too-common opinion as of late — but her explanation made complete sense and was a huge compliment to the entire family.

When Dunham and Konner launched feminist newsletter Lenny Letter late last year, they earned praise from nearly all walks of the modern feminist movement. And that applause was well deserved: their subscriber-based newsletter has provided a safe space for female contributors to cover controversial topics like wage inequality, internet trolling, police violence against women, and rape, without fear of negative comments by internet trolls. That the newsletter counts presidential candidate and former Secretary of State Hillary Clinton, First Lady Michelle Obama, and outspoken actress Jennifer Lawrence among its early contributors is in itself a seal of approval worth applauding.

But, when Khloe Kardashian tweeted praise to the writing and directing team, Dunham and Konner said it blew their minds for more than a moment. In a video clip from their Late Night appearance, Konner told Meyers what happened when she discovered that Kardashian was a Lenny Letter fan:

Konner: We were in the writers’ room and I may have been taking a minute to scroll through Twitter. I was scrolling through and I literally stopped the room cold and said ‘Khloe Kardashian just tweeted at us about Lenny.’ And the room was like, ‘Wow that’s so great!’ And we were hugging and so excited and then we couldn’t get back to work for the rest of the day.

The pair said that it was a huge deal for them, since Khloe is far and away their favorite member of the Kardashian family. “It meant so much because we both love her app.” Konner said. “She’s the best Kardashian.” Added Dunham, “That’s not us throwing Kardashian shade. It’s just for us she’s the peak Kardashian experience.”

Dunham also said that she and Konner sometimes get backlash from fans who don’t understand why the women would consider the Kardashians — largely known for their reality television, social media, and fashion endeavors — to be serious feminist role models:

Something that makes me angry is that, you know, sometimes we’ll Instagram about Khloe, you know once or twice a day. And people will be like. ‘That’s not — those Kardashians aren’t what you represent!’ And we’re like, ‘Well, they’re like awesome entrepreneurs who are all about sisterhood and connection, and so yeah it is.’

That’s quite a compliment to the reality television superstars — and it makes sense, given that Dunham and Konner have built an entire platform based on the idea that there’s more than one way to view feminism.

It isn’t often that someone gives kudos to America’s ultimate reality family dynasty as role models for women and girls. But it’s true: from matriarch Kris to young mogul-in-the-making Kylie, the women have built their public personae and business enterprises based on their own savvy and nerve. Whether Dunham's fans love or hate the Kardashian crew, it's undeniable: the sisters' continued success and popularity is kind of bad ass.

The full clip of Dunham’s and Donner’s interview on Late Night With Seth Meyers is available here: