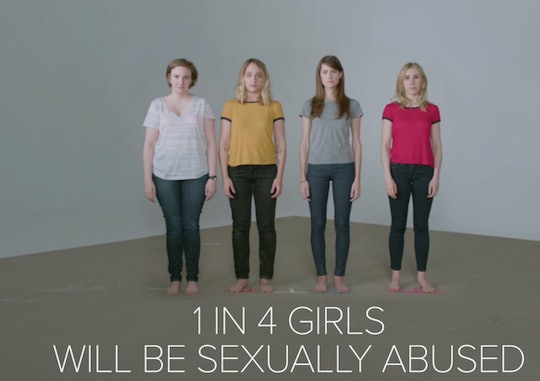 Lena Dunham's Sexual Assault PSA Is So, So Important

Out of the Brock Turner assault case has arisen, if nothing else, a brand new call to action on the topic of sexual assault. If anything has come from the awful crime that was committed by Turner, it is the rampant spread of conversation surrounding rape and accountability in general and how it can truly affect someone both mentally and physically. It is important to understand that victims of sexual assault are people who have to relive their nightmares every single day. This is why Lena Dunham's sexual assault PSA is so, so important.

More Like This
Exclusive: Teen Artist Tyler Gordon Reveals The “Ultimate Hero” He Wants To Paint
Peppa Pig Is Going Camping In A New Live Show & You’re Invited!
Everything You Need To Know About Prince Harry & Oprah Winfrey’s Series
Here Are 25 Shows You Can Feel Good About Your 2-Year-Old Watching

Lena Dunham gathered her core cast of girls — from Girls — to film a public service announcement, which NowThis debuted on Twitter this Wednesday. The girls appear barefoot, in different colored t-shirts and jeans, staring into the camera. Each actress introduces themselves and states different ways they are not alike. But, they can agree on something: Sexual assault does happen and its not something that should be ignored.

The cast proceeds to throw out some very shocking statistics, such as that 80 percent of sexual assaults will be carried out by someone the victim knows. Statistics like these are not uncommon or new information. "But why is our default reaction to disbelieve?" actress Zosia Mamet asks in the PSA.

Instead of asking for donations or offering a hotline, Dunham's PSA has an incredibly simple but positive message: Support those who say they have experienced sexual assault and be there for them. Be open, welcoming, kind and supportive for whatever they need. Be the open ear so they can talk, or the ride to their counseling. The PSA simply encourages people to be an open, positive individual so victims of assault feel comfortable enough to come forward.

Dunham's PSA also has an incredibly important message for how we should look at the victims of assault. We shouldn't take action because these people mean so much to others. Victims are not just someone's daughter or sister — they're their own person and they mean so much to themselves. It means that they are valued in this society as a person and should not be labeled as someone else's property or possession. She is someone. Rather than someone else's.

"I dedicate this to the brave survivor in the Stanford case who has given so much to change the conversation," Dunham tweeted, along with the video. Dunham is right. With the amount of people talking about aspects of the case — whether it is the involvement of alcohol, or the length of Turner's sentence — which was reportedly shortened by two months on Wednesday night.